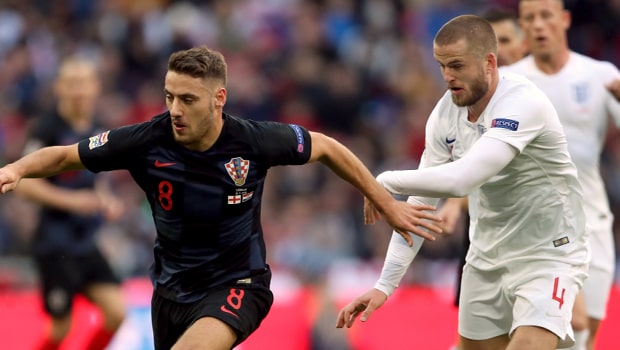 It was a hard-fought battle at Cardiff Stadium, but the hosts managed to salvage a point against the group leading Croatia. Wales went down early on, as Nikola Vlasic scored clinically from the visitors’ first attack on the 9th minute, finishing off a brilliant through-ball by Bruno Petkovic. Croatia had the control of the midfield throughout the first half and played their usual physical style, keeping Wales off the offensive end and counter-attacks.

Welsh perseverance paid off in the finishing minutes of the first half. Ben Davies – who earned his 50th cap for Wales – played the ball into the box for goal-hungry Gareth Bale, who showed his composure and finishing skills by putting the ball coolly past the Croatia keeper Livakovic into the net. Bale’s goal added to his grand total of 33, already 12 ahead of Ian Rush in Wales national team all-time scoring race.

The physical contest saw the referee brandish a total of eight yellow cards and it wouldn’t have been a surprise to see some red as well. There were rough challenges from both sides and Wales was left angered by the injury of Ethan Ampadu after a hard collision. The midfielder had to be subbed out right after the break. Dan James collected a knock as well, but ran it out, while Joe Allen took a yellow card and will be suspended for the next fixture against Azerbaijan.
Not many scoring chances were created throughout the game: Wales shot three times on goal, while Croatia had two. The visiting team was able to keep most of the possession, but didn’t look too committed to making a push for the winner. The draw was good enough result for the group leaders as they’re in comfortable position to qualify by their own means with one game remaining.

While Wales can be happy snatching up a point from the World Cup finalists, it was a cold comfort. Hungary took the win and three points from Azerbaijan, meaning that qualifying is no longer in the hands of the Welsh. Slovakia needs to drop points in their remaining two games, while Wales will have to beat Hungary and Azerbaijan in order to leapfrog from 4th place to 2nd behind Croatia. The deciding games take place midway through November.
The silver lining is, regardless of what happens in the qualifications, Wales still has a chance to make their way to Euro 2020 through Nations League. But that’s whole another story.