Posted by Iniobong Umoh on September 9, 2019 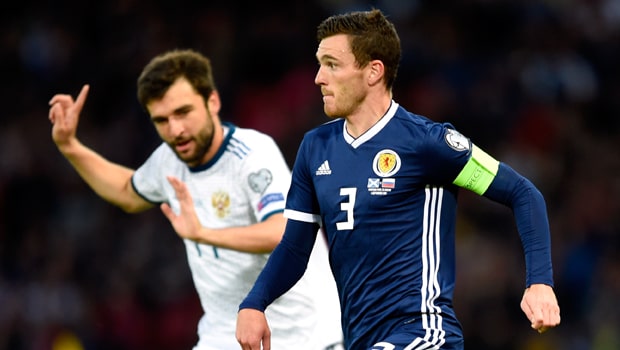 Scotland’s hopes of qualifying for the 2020 European Cup rely on getting a positive result against Belgium says, Andrew Robertson

Scotland skipper, Andrew Robertson has urged his side to get a positive result against the Red devils of Belgium if they are to stand a chance of qualifying for the 2020 European championship through group one.

Steve Clarke’s side has six points from nine games and is placed fourth on group one log after a 2-1defeat by Russia at Hampden Park on Friday night.

Scotland midfielder, John McGinn put Steve Clarke’s side ahead in the 10th minute, but poor defending from the Scotland backline allowed Artem Dzyuba to draw Russia level in the 40th minute before right-back Stephen O’ Donell’s own goal put Russia ahead in the 59th minute.

Ahead of their game against Belgium on Monday, Andrew Robertson has urged the team to get a result against Belgium to keep their Euro 2020 hopes alive. The Liverpool left-back knows Belgium have twice won comfortably in the last two meetings between the sides in the previous 12 month, adding that the worrying thing is how far the Scotland Team are behind Russia on the log and that there is no other option but to get result and “if we don’t get one on Monday, I think it will be verging on impossible to get through this group”.

The defender was slammed by Scotland fans for his performance against Russia. The Liverpool left-back, who was named in FIFA’s Team of the year last season due to his impressive accomplishments, made a costly mistake that directly led to a goal against Russia at Hampden Park.

Clarke has stated that Scotland have “good mental strength” as they make preparations to face in-form Belgium at Hampden on Monday. Clarke also added that he would not risk Hearts forward Steven Naismith in the game. Naismith missed Friday’s game due to a hamstring issue, so will not be available for selection. He also indicated that there will be few changes to his starting line-up.

Scotland fans took to social media to voice their frustration following the defeat which leaves the Tartan Army hopes of automatically qualifying for Euro 2020 competition in tatters.

Scotland are backed at 8.30 to steal a memorable win over Belgium. While Belgium are priced at 1.41. A draw is also backed at 4.78.