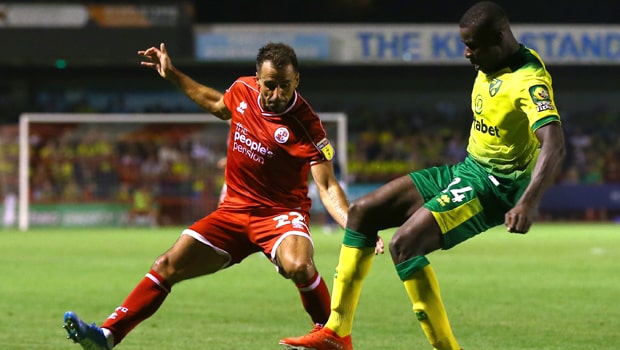 Norwich has completed the signing of France and Sevilla defender Ibrahim Amadou on a season-long loan, with an option to buy at the end of the season.

The 26-year-old Amadou is now the latest Norwich City player. Although his favored position is in defensive midfield, he is able to play at a number of roles including center-back.

The French youth international started his playing career with Nancy before joining Lille in 2015. Amadou played extremely well in his three seasons at Ligue 1 club, Lille before moving to Sevilla last summer, but had an on and off-season with them.

Ibrahim Amadou was born in Douala, Cameroon, but his family moved to France when he was four. They lived in Colombe, and he began playing at the local club, AS Cheminots de l’Ouest. He then spent four years at Racing Club de France, before moving to the AS Nancy academy in 2008. In the summer transfer window of 2015, Amadou penned a four-year contract with Lille for a transfer fee of €2 million.

In the 2017/18 season, former Lille manager Marcelo Bielsa appointed Amadou as the club’s captain. He left for Sevilla the following year.

Amadou nearly signed up for Crystal Palace in January 2018, but the deal didn’t go through.

Amadou is described as a towering and athletic defender, who loves to man-mark opposing strikers. He arrived in Norwich last week Tuesday and also trained for the first time at Colney Training Centre.

While speaking at a press conference, He said: “I’m happy to play for Norwich because I know they just got promoted with a lot of points in the Championship. “It’s a new challenge for me, and I would like to discover more about the Premier League.”

He could make his debut for Norwich in their next game against Manchester City.

Norwich City are priced at 15.61 against Manchester City which are favoured at 1.17 to win the match.