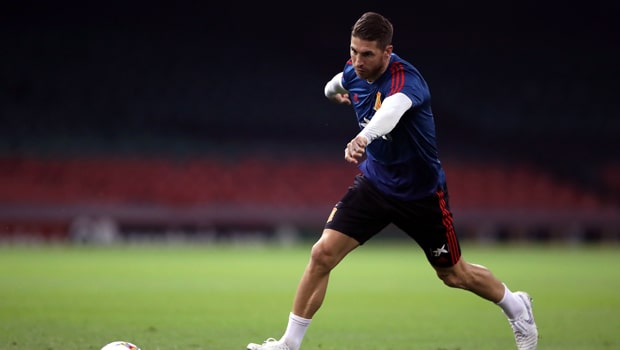 Spain’s Euro 2020 qualification was delayed after they were held to a 1-1 draw in Norway after Joshua King’s late penalty ruined Sergio Ramos’ record-making night and Spain’s 100% record in Group F on Saturday night.

Spain, who were Champions of the Euros in 2008 and 2012, will now hope to get a victory on Tuesday against Sweden, which will be more than enough to secure their qualification to the competition.

In the game against Norway on Saturday night, Sergio Ramos surpassed former Real Madrid Goalkeeper, Iker Casillas, to become Spain’s most capped player with 168 appearances. This also means that the 2010 World Cup winner will equal Italian Goalkeeper Gianluigi Buffon on the European international appearance record if he can add eight more caps to the 168 caps he has now.

The Real Madrid Skipper, who made his national team debut in 2005, expressed his disappointment with the draw and stated he would gladly trade the record for a victory on the night.

“I would have happily traded this 168th cap for a victory, although this record is a great reward after so many years, and it’s a great source of huge pride”. Ramos stated

Atletico Madrid midfielder Saul Niguez scored a brilliant effort in the second-half effort off a Sergi Busquets’ assist to give Spain the lead, but Chelsea’s Kepa Arrizabalaga fouled Omar Elabdellaoui late into the game, and Josua King made no mistake from the spot in the 94th minute.

Meanwhile, Spain’s Tuesday opponents Sweden beat Malta 4-0 to sit second with 14 points and one point above Romania in third.

Belgium, Russia and host France are the only teams whose qualification has been confirmed although, other countries may secure their qualification in the coming days.

Spain will take on Sweden in their next qualifying match. Spain are backed at 1.88 to claim the win, while Sweden are pegged at 4.35.