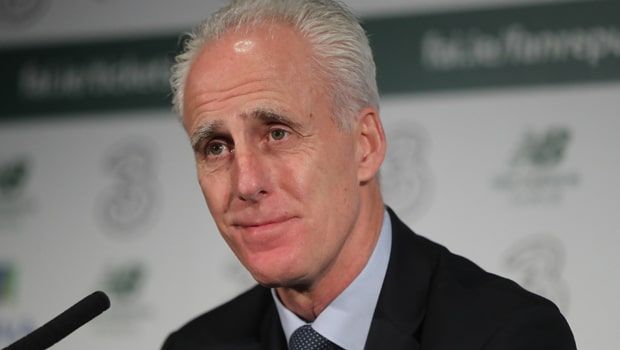 Mick McCarthy’s second term in charge of Republic of Ireland will come with a determination to end the goalscoring woes of 2018, says the manager.

Ireland struggled to score goals during the final stages of Martin O’Neill’s stint as boss, ultimately leading to the departure of the-now Nottingham Forest manager and his assistant Roy Keane in November.

McCarthy has come in, 17 years after he departed the job, for a short-term contract that will see him attempt to get Ireland into the Euro 2020 Finals next summer.

After the campaign ends, for better or worse, McCarthy is set to pass the baton to Stephen Kenny, the new Under-21 manager.

Ireland are in Group D in the European qualifiers, with Denmark and Switzerland seeded above them. Minnows Gibraltar are first up on Saturday, before a home game against Georgia in Dublin on Tuesday, with a quick start seemingly imperative.

Given their recent struggles in front of goal, McCarthy will be concerned and he has lost the likes of Shane Long to injury this week. But he does see enough in training to work with and says his team will be encouraged to play on the front foot.

“That is one thing that the players have been criticised for and we are trying to encourage them to pass forward, get forward, get in the box, shoot, create chances and try to take them,” he said.

“Creating them is one thing, taking them is another thing altogether. But if you’re watching [training] this [week] we’ve got some really good players.”

“But I’m pragmatic as well. I’ve got eight games to get us qualified for a major competition. I think it’s important that we get results.”

Republic of Ireland are 3.25 conceding a three-goal handicap to Gibraltar on Saturday, while the home side are 41.00 to win the match.