Low urges win over Northern Ireland to qualify for Euro 2020

Posted by Iniobong Umoh on September 8, 2019 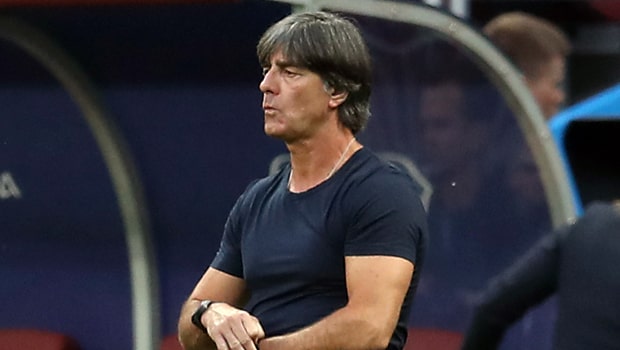 Germany National team coach, Joachim Low has urged his German side to go out for victory when they take on Northern Ireland after their home defeat by the Netherlands on Friday.

Joachim Low’s team lost 4-2 to the Netherlands in Hamburg on Friday. Serge Gnabry put Germany ahead in the 9th minute after he fired home a rebounded shot from close range. Frenkie de Jong scored in the 59th minute to draw the Netherlands level; it was two in no time as Jonathan Tah ended up turning the ball into his goalpost from a corner to put the Netherlands ahead. Toni Kroos scored from the spot to draw Germany level after the ball struck Matthijs de Ligt’s hand in the box. Donyell Malen debut goal put the Netherlands ahead again before Georginio Wijnaldum’s late tap-in sealed the win for the Netherlands. The loss means Germany are placed second in the competition, three points behind group leader, Northern Ireland.

Low was criticized by the German media for playing with a back three of Ginter, Sule, and Tah. The German has promised to bring the changes on Monday’s game against Northern Ireland. “We need to approach the game in such a way that we leave the pitch as winners,” said the German gaffer.

Germany is placed second in the Group stage, and a victory over Northern Ireland would put the Germans on the brink of automatic qualification.

Goalkeeper and skipper of the side Manuel Neuer have called on his team-mates not to underrate a Northern Ireland side who have won their last five games. Left-back, Nico Schuz who plays for the German team, Borussia Dortmund has been ruled out of the game in Belfast due to a foot injury sustained in Friday’s defeat to the Netherlands.

Northern Ireland Rangers winger Jordan Jones will miss the game as he is out for up to six weeks on the sidelines, after a brash tackle in the Old Firm derby. Northern Ireland will also be without Hearts defender Michael Smith, who has been left out of the squad due to a hamstring injury. Ireland coach O’Neill has no other major injury concerns to contend with for the upcoming fixture.

Germany will continue to be without Premier League players Leroy Sane and Antonio Rudiger, but there are no fresh injury concerns.