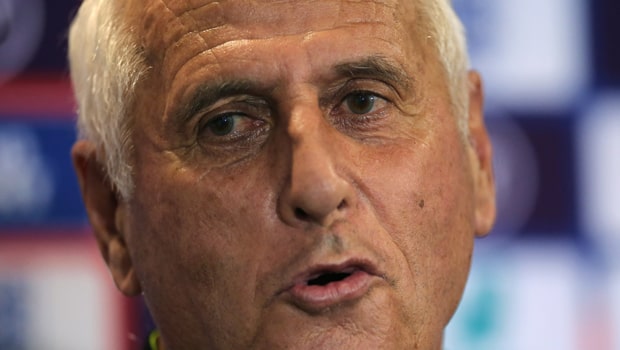 Kosovo manager, Bernard Challandes has explained how he intends to defeat the three-lions in Tuesday’s EURO 2020 qualifier at Wembley.

The Swissman has previously managed the Armenia national team. Challandes signed a two-year contract with Kosovo on 2 March 2018 after former gaffer Albert Bunjaki resigned in October 2017 after a run of poor results. He made his first match on 24 March 2018 in a 1-0 home win against Madagascar. The Swiss manager is yet to taste defeat with the Balkan Nation.

Kosovo is unbeaten since Challandes took over as manager in February 2018. On Saturday,r Challandes lads extended their unbeaten run to 15 games with a 2-1 victory over the Czech Republic. Patrick Schick opened the scoring for the Czech Republic in the 16th minute with a tidy first-time finish. Verdat Muriki leveled for the home side in the 20th minute, before Merjim Vojvoda scored to seal the victory for the Balkan Country.

Kosovo is placed 2nd on the log behind England. Kosovo already has a good chance of reaching the EURO 2020. However, the top two qualify automatically. The Balkan Country play England on Tuesday at Wembley. Kosovo is unbeaten in the European Championship qualifiers having played four matches, winning two and drawing two. The Balkan Nation are a point behind England and could move up to top if they defeat Gareth Southgate’s side on Friday.

Kosovo played their first competitive international football match in 2016. The Balkan Nation made their debut in on European Championship qualifying with a 1-1 home draw against Bulgaria, and the draw goal was scored by Arbër Zeneli on the 61st minute. The Balkan Nation won their first-ever qualifying match for a major tournament by defeating Bulgaria 3-2.

The Balkan nation will be desperately hoping to qualify for the 2020 European Cup, and getting a good result against the English national team will help their course.

Kosovo are backed at 11.29 to seal a shocking win over England, while England are 1.07 to claim a victory.