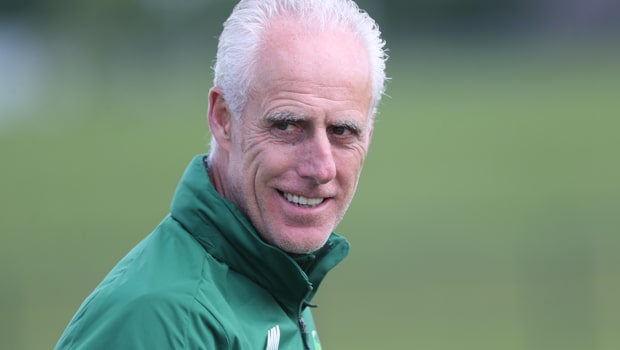 Republic of Ireland boss Mick McCarthy admitted he felt ‘annoyed’ after his side stuttered to a 2-0 home win over Gibraltar in their Euro 2020 qualifier, but he was happy to pick up three points.

The Irish have taken ten points from four games in Group D, twice defeating minnows Gibraltar alongside a home win against Georgia and a hard-earned point in Denmark.

That is enough to have them on top of the group and, while tougher tests lie in wait, McCarthy has suggested they must be content with their lot. An own-goal in the first half was all Ireland had to show for their dominance against Gibraltar until sub Robbie Brady headed home in stoppage time.

McCarthy cut a frustrated figure on the Aviva Stadium sideline and he, like his players, was unimpressed with the performance.

“What is really disappointing is that I had a bunch of lads coming in and it felt like we lost, the dressing room is all quiet,” said McCarthy.

“I am annoyed, I play annoyed, I manage annoyed, if it’s not going right of course I am, like the players as well.

“We made some great runs but we were caught offside, ultimately we won the game that’s what I wanted, I’d love to have turned everybody on with some sexy football tonight but it’s a two nil win [and] ten points.”

With games against Switzerland and Denmark to come in the autumn, as well as a trip to Georgia, McCarthy says his squad should be content to have achieved what they have over their first four games. He says Ireland typically perform better in tougher assignments where they aren’t favoured.

“Isn’t it interesting how we have played better [in] the tough tests, we played really well against Georgia, beat them had a really good performance the other night got a great point,” he added.

“I’m not worried about this we will play better against them [teams], I’m not coming here to be miserable – if you want me to be that, unlucky, we’ve won ten points and they are all in my pocket. By the way I’m not giving any of them back.”