Jack Nicklaus: Tiger Woods the man to beat at Pebble 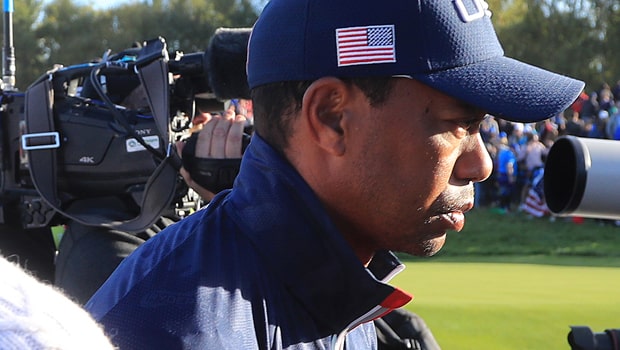 Jack Nicklaus feels Tiger Woods is going to be the man to beat at the US Open in Pebble Beach this week.

The Masters champion is heading back to the scene of his greatest ever performance and, while there are plenty of in-form players going with him, Nicklaus feels Woods is a real contender for glory.

Woods won his first Major since 2008 at The Masters at Augusta in April, while he recorded the largest-ever margin of victory in a Major with a 15-stroke win at Pebble Beach in 2000 and can equal the record of four US Open wins should he triumph on Sunday.

The former world number one can also equal Sam Snead’s all-time tally of 82 PGA Tour titles and move within two of Nicklaus’ Major haul of 18 and the latter says he’s going there with a big chance.

When asked who his favourite to win the third major of the year would be, Nicklaus told Sky Sports: “I would think Tiger.

“[He] won there by a million there the last time he won, he grew around that area and he is smart, so knows how to play there. “I think Tiger will play well but a lot of the guys are playing well too, so it’ll be a good tournament.”

Nicklaus knows there are no shortage of in-form contenders for US Open glory. Brooks Koepka is chasing a hat-trick of US Open wins while Rory McIlroy arrives having bulldozed the field in the Canadian Open on Sunday.

Pebble will offer a fair and potentially fatal test to all, says Nicklaus. “Length is not the big issue there, the issue is being smart,” Nicklaus added.

“A double-bogey happens real quickly at Pebble Beach. “You have to put yourself in a position to take advantage of a hole when you can. The greens are tough to make putts on, but the guys have played a lot there and understand a little bit about what goes on there.”