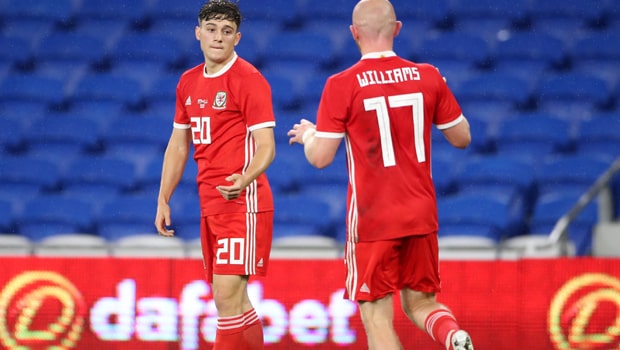 The 21-year-old has had an exciting start to life for Manchester United since joining from Swansea in the summer. He has started the campaign on the front foot, finding the net thrice for the club, one more than Anthony Martial and Marcus Rashford who both play more advanced roles than himself.

He has now taken over that form to his national side, helping them to a marginal win against the Belarusians. Putting things in perspective, Belarus should be flattered by that scoreline having had to play behind the ball for most parts of the game.

In what is slowly becoming a trademark run for 21-year-old James and a usual spectacle for Manchester United fans, the winger cut in from the left, switching the ball onto his right foot and curling the ball into the far post.

The goal scored by the £15 million United’s signing was exceedingly brilliant and nonetheless non-forgiving. It was a fierce finish, dispatched and executed from similar positions like the ones he scored against Southampton and Crystal Palace this term. Indeed, it fetched him applause from his team’s talisman in Gareth Bale who was at the time in the dugout.

Wales gaffer Ryan Giggs had urged his players to build some momentum after their Euro 2020 qualifying win over Azerbaijan, and they did just that! Yet, they have no one to blame for their lack of luck in the final third.

Bournemouth’s Harry Wilson missed the chance to send Wales into a more comfortable sofa when his shot at goal was saved by the upright and Gareth Bale who came in for Daniel James a few minutes after the break missed a sitter.

Giggs was the recipient of a truckload of criticisms after Wales win against Azerbaijan. However, Bale showed his faith in the manager, insisting that the former Manchester United man was building a team that could play swift attacking football.

Their play against Belarus showed every bit of that quick, attacking football the Real Madrid winger talked about. In the end, however, only results count, something James served them on a gold platter.

Wales are backed at 5.25 to emerge as winners of the UEFA European Qualification Group E