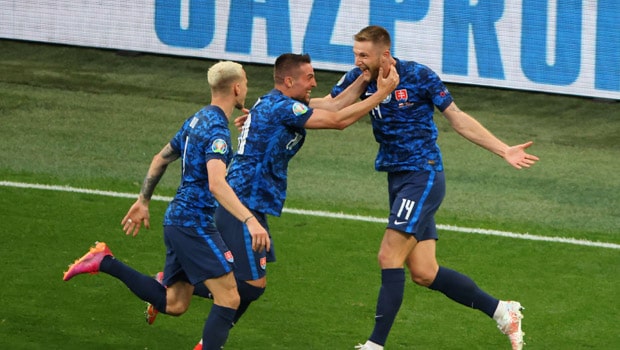 Poland faced Slovakia in the opening match of Group E. Both the teams had some big names in their line-up as the likes of Wojciech Szczesny, Piotr Zielinski and Robert Lewandowski took field for Poland while Skriniar, Hamsik and Dubravka were a part of the Slovakian eleven.

Poland started the match as favourites due to the quality they possessed across their pitch. While Poland’s star man Robert Lewandowski is at the peak of his powers, Slovakia’s veteran Marek Hamsik is about to turn 34. The match started as expected. Poland was having more possession, while Slovakia was playing on the counter. These counters were really fast paced, which caught out Poland on more than few occasions.

Slovakia took the lead in the 18th-minute thanks to an own goal by Wojciech Szczesny. The remainder of the first half panned out in similar fashion as Poland were occupying the Slovakian half for a majority of the time, but Slovakia’s counter attacks were looking more likely to bear fruit.

Just as the second half started, Polish midfielder Karol Linetty who plies his trade for Torino in Serie A scored a goal and drew level. This goal was a real positive for the match as it would bring Slovakia out of their half and make them more adventurous as they no longer had a lead to defend.

Just a couple of minutes post the hour mark, Grzegorz Krychowiak was given a second yellow card as he lunged in late. Poland were down to 10-men which is when Slovakia stated seeing more of the ball. From this point onwards, it was always going to be difficult for Robert Lewandowski’s side to take the lead.

One of Slovakia’s star players, Milan Skriniar restored the lead for his side with a composed right footed shot past Szczesny. Slovakia did enough to hold on to the lead during the last 20 minutes as Robert Lewandowski looked a helpless figure after receiving poor service.

This result opens the group wide open as Slovakia find themselves at the top after Spain played out a 0-0 draw against Sweden in the second match of the group.