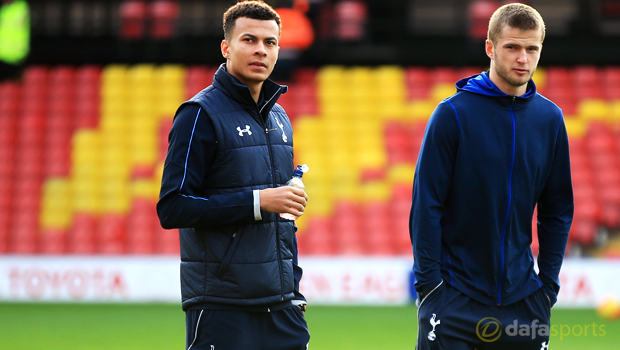 Jenas, who also played for Spurs in a stellar career, has watched the two north London stars develop over the past 12 months and both have been instrumental in Tottenham’s excellent season to date.

Alli has scored six goals from 21 Premier League appearances while the more defensive-minded Dier has bagged three from 22 outings.

With Mauricio Pochettino’s side currently fourth in the top-flight standings and priced at 1.33 to finish the campaign in the top four, the duo have been rewarded with their first full England caps.

Alli has four to his name with one goal already in the bank while Dier has made two appearances in a Three Lions shirt.

Hodgson is currently doing the rounds to view potential members of his squad and there is a sense that there are many places up for grabs for next summer’s showpiece event.

And Jenas feels that there could be a slot for Dier in front of the back four, with no obvious candidate at present.

“The fact is that no England player has made that holding midfield position their own,” he told Eurosport. “[Jack] Wilshere, [James] Milner and [Jonjo] Shelvey have all played there, but I think they are all more effective further up the pitch.

“On current form, you’d have to pick Eric Dier ahead of them because he has been playing regularly for Tottenham Hotspur and he has barely put a foot wrong.”

There are some sections of the media who have already inked Alli’s name onto the team sheet for Euro 2016 and he did himself no harm at all with a wonder goal against Crystal Palace on Saturday.

But Jenas questioned whether the former Milton Keynes man could be used from the start and insists he could be more of an impact player later on in games.

“Dele Alli has been outstanding, but I think he’d be best used coming off the bench in the Euros and he could set the tournament alight,” he added.