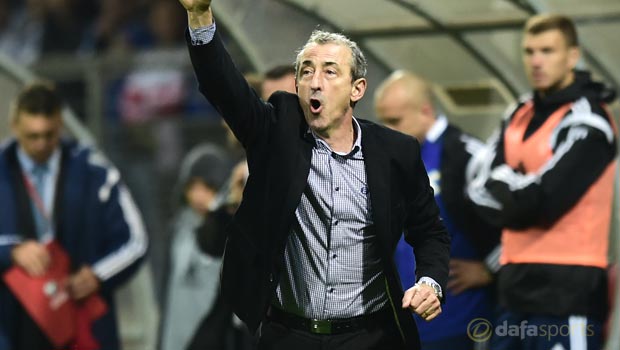 Bosnia coach Mehmed Bazdarevic hailed his side’s strength after they fought back to beat Cyprus 3-2 and claim a Euro 2016 play-off place.

Ahead of the final round of fixtures on Tuesday there were three teams in Group B vying for third place, with Wales and Belgium already having secured the automatic places.

Israel, the Cypriots and Bosnia all had a chance to finish third but the Israelis slipped to a 3-1 defeat in Belgium, ending their hopes of competing in France next summer.

Cyprus led Bosnia 2-1 in the first half thanks to goals from Constantinos Charalambides and Nestor Mytidis, but Haris Medunjanin hit a first-half brace to ensure the two sides were level at the break.

Milan Djuric’s header in the second half secured the win for Bosnia and Bazdarevic has heaped the praise on his side.

Star striker Edin Dzeko missed the trip to Cyprus but the Bosnia boss hopes to have him available for next month’s play-off.

“The players put in a great effort despite the fatigue and the team that wanted it more won it in the end,” Bazdarevic told UEFA.com. “I’d like to thank my players for the effort. The team wasn’t in best condition when I took it over.”

He added: “The play-offs will be difficult. Edin Dzeko was fit and able to play but I chose to rest him for the next tough games.”

The play-off draw will take place on Sunday, with Bosnia, Ukraine, Republic of Ireland, Norway, Slovenia, Hungary, Sweden and Denmark all in contention to secure one of the four remaining places in Euro 2016.