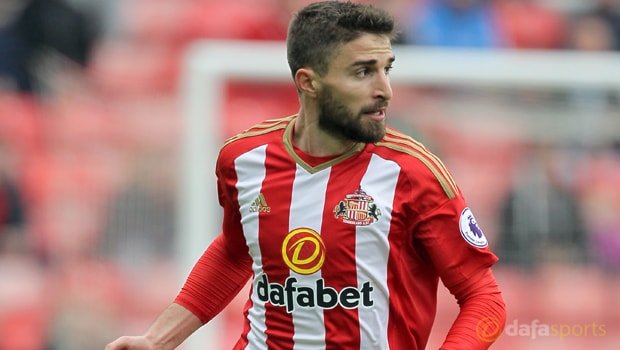 Sunderland striker Fabio Borini is undergoing a medical at AC Milan ahead of a potential return to Serie A.

The Rossoneri have released images on social media of Borini undergoing his medical after he was reported to have flown to Italy on Wednesday.

Assuming he comes through unscathed, Borini is set to complete a £5.3million permanent transfer to the San Siro, according to reports in the Italian press.

Borini first arrived in England at Chelsea in 2009 although he made just four Premier League appearances for the Blues.

In the summer of 2012, Borini became become Brendan Rodgers’ first signing as Liverpool manager, joining from Roma for a fee in the region of £10m.

He failed to make the grade at Liverpool and would spend the 2013-14 season on loan with Sunderland before moving permanently to the north east in a £10m switch from Liverpool on a four-year deal in August 2015.

He has scored 16 goals in 82 appearances for Sunderland and spent most of last season as second fiddle behind Jermain Defoe as Sunderland were relegated from the Premier League under David Moyes.

The 26-year-old had also been linked with a move to Lazio when he flew to Italy this week, but it appears AC Milan will be his next permanent destination, with the player not too keen to try his hand in England’s second tier next season.

Sunderland are 15.00 to win the Championship title next season while AC Milan are 12.00 to win Serie A.