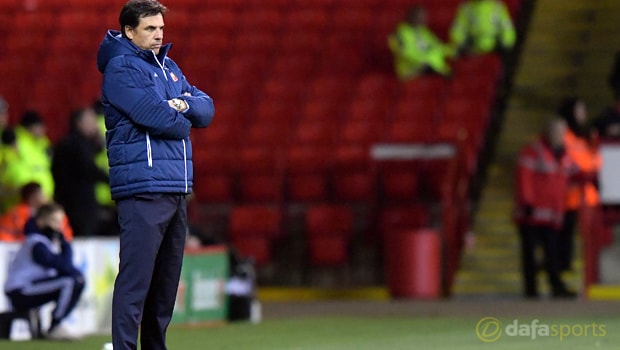 Sunderland boss Chris Coleman says the club are prepared to be “pro-active” during the upcoming January transfer window, his first as boss of the Black Cats.

The former Wales coach arrived at the Stadium of Light in November and he revealed that plenty of thought has already gone into a strategy for next month.

Getting new faces in is a priority but Coleman is also prepared for some players to leave the club.

“It’s inevitable we could lose one or two ourselves so we’ve got make sure we’re pro-active, so we don’t get caught short if that does happen,” Coleman said.

“It could be an active transfer window – we could do with one or two faces to help us out – but time will tell whether that’s the case or not.”

Relegated from the Premier League last season, Sunderland now find themselves in a real dogfight to avoid dropping into English football’s third tier.

They are 22nd in the Championship, with just 19 points from 24 so far, one point from safety.

Coleman says he and assistant manager Kit Symons, along with coaches Robbie Stockdale and Adrian Tucker, chief executive Martin Bain and recruitment officer Neale McDermott, have all worked on a plan for next month.

Coleman added: “We’ve spent a lot of hours discussing it to see if we can add a bit of quality to what we’ve got, to help us out.”

Sunderland are 3.60 to win at Nottingham Forest on Saturday while the Black Cats are 2.50 to be relegated this season.