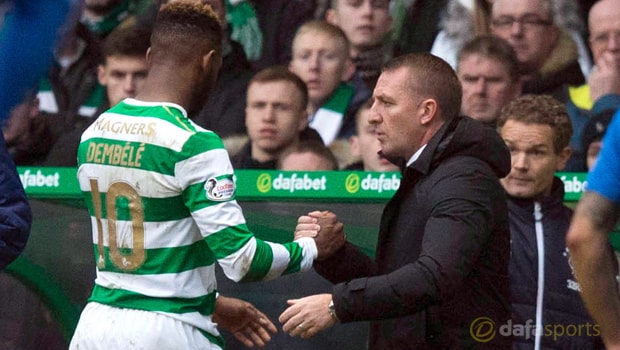 Rodgers watched on as his side battled to a goalless draw in Saturday’s Old Firm clash with Rangers, a match in which his Bhoys lacked their usual creativity and spark.

Dembele’s performance was arguably the most disappointing feature for the home side and came on the back of a week of rumours linking him with the Premier League.

Brighton are believed to be the favourites for his signature, while West Ham are also amongst those thought to be keen on taking the former Fulham youngster back south of the border.

With the winter break now on the horizon, the rumours are likely to fly around Parkhead and Dembele may well be distracted.

Rodgers though is confident the board will keep hold of the 21-year-old, while he has also suggested they will be doing some business of their own.

“It’s not something that I’ve even thought of,” he told BBC Scotland. “We’ve had nothing for any player.

“Collectively we are a team. It’s not just in isolation one player. We have a responsibility to get it into our front players with a bit more quality.

“I There are probably some players that’ll go out, that’ll want to play games and obviously January’s a month where you like to strengthen as well so I’m sure there’ll be something done.”

One thing in Celtic’s favour could be their participation in the Europa League after Christmas and they are 2.60 to win the opening leg of their last 32 tie against Zenit St Petersburg, with the draw 3.30 and the Russians also 2.60.