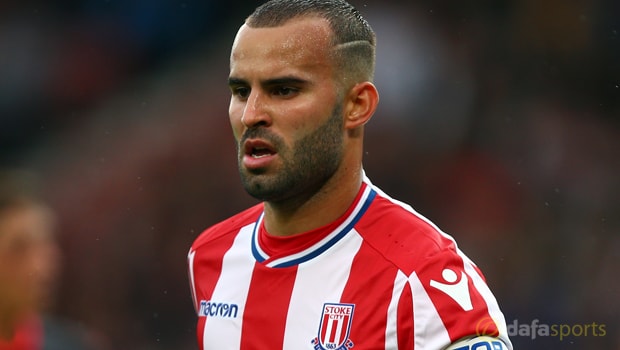 Stoke boss Mark Hughes insists Jese Rodriguez is still very much in his plans despite the forward being given disciplinary action and compassionate leave over recent weeks.

The Spaniard joined the Potters on a season-long loan from Paris Saint-Germain during the summer and the early signs were promising, particularly following his match-winning goal against Arsenal in August.

However, the 24-year-old has struggled since that early-season strike, starting just seven Premier League games in total, while he was disciplined by the club after leaving the dressing room when he realised he wasn’t going to feature against Swansea earlier this month.

Jese has also recently been on compassionate leave due to his son’s health issues but Hughes is hopeful the forward will return to action for this weekend’s clash with Chelsea at Stamford Bridge.

“We’re not quite sure how much work he’s been able to do,” Hughes said.

“He’s not quite where he needs to be, to be a factor for us. He might get back to the level he needs to be at very soon, hopefully.”

Hughes has also dismissed claims Jese could cut his loan-spell short during the January transfer window as he believes the former Real Madrid player wants to succeed in England.

“Clearly the Premier League is where he wants to be, with us,” Hughes added.

“It’s just unfortunate because of his family circumstances that he hasn’t been able to commit to what he’s needed to do here to be effective for us.”

Stoke are currently 13th in the top-flight standings, three points above the relegation zone, and are priced at 4.50 to finish in the bottom three.