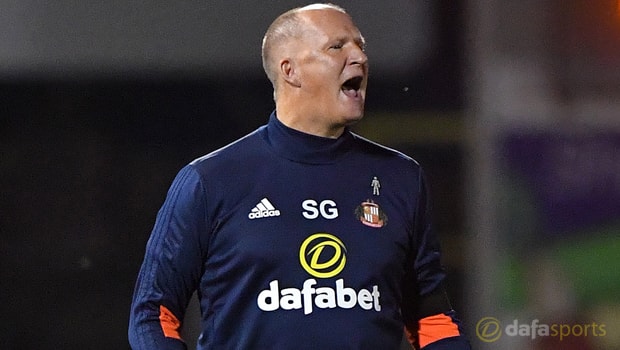 Simon Grayson says he is still not panicking about Sunderland’s form, despite them currently sitting in the relegation zone.

The Black Cats’ frustration continued on Saturday as they were held to a 1-1 draw by Queens Park Rangers and have now won just one of their 12 Championship outings.

Grayson arrived at the club in the summer hoping to reignite the team following relegation from the Premier League last term and would not have expected to find himself in his current predicament.

Saturday sees the Yorkshireman take his side to Brentford for a tough clash they are 4.00 to win, with the draw 3.75 and the Bees 1.85.

With so much upheaval at the Stadium of Light in recent years, sticking with Grayson could be the best way forward for the club and he is certainly not panicking, despite being 23rd in the table.

Sunderland are currently just 3.50 for relegation but the boss is doing his best to remain calm and is adamant they are on the right path.

“The position will only become a worry when you’re still in it and it’s mathematically impossible to catch the teams above you,” he said.

“We want to win games, but I’ve said to the players that this was never going to be a walk in the park – not for me, not for anybody playing for this club, and not for the supporters either.

“It’s a tough ask in the Championship, and it’s tough for this football club at this moment in time, but sometimes it’s about taking small steps.

Sometimes, small steps that you build along the way, like the Preston result and performance and bits in this game as well, can ultimately lead to bigger steps in the future.”