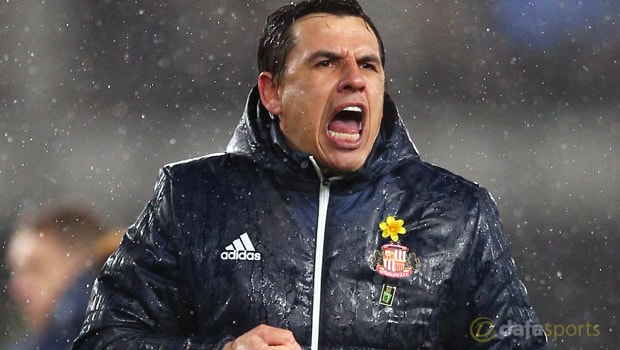 Sunderland manager Chris Coleman says his side are up against it as they look to beat the drop after being held to a draw on Saturday.

The Black Cats took the lead against Leeds at Elland Road with former Manchester United defender Paddy McNair breaking the deadlock, however, Pablo Hernandez levelled with just under 20 minutes left to seal a share of the points.

Sunderland, who are priced at 1.02 to be relegated, sit one place off the foot of the table, seven points adrift of safety, with five games left to play this term.

The next few weeks will prove crucial in deciding whether the north-east outfit can avoid back-to-back relegations with some key fixtures on the horizon.

Promotion-hopefuls Fulham and Wolves wait for Sunderland in their final two engagements of the season, and Coleman will undoubtedly want his men to try and take the maximum points on offer before facing them.

The former Wales boss accepts that Sunderland are up against it but insists they will continue to fight until it become mathematically impossible.

Coleman said: “We’re not daft, and there’s no sentiment in football.

“For us to stay up, we’ve got to win just as many games as we have all season, really.

“It’s a big, big test for us, and you wouldn’t put money on us, but hey, we can only keep performing like that.

“You saw our support at Leeds – they don’t deserve any of us throwing the towel in just because there’s a points gap.

We’ve got to give it everything we’ve got. Our supporters appreciate a bit of heart and passion.

They’ve got that in the last two or three games, so we’ve got to emulate that between now and the end of the season.

The results will be what they’ll be – we just have to take care of the performances.”