Chris Coleman: I must revive Sunderland 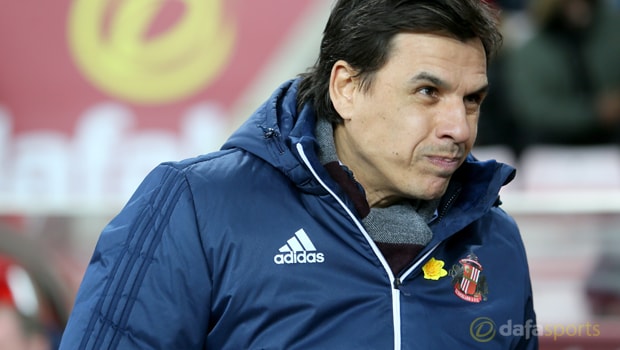 Sunderland manager Chris Coleman says he felt dejected after the midweek defeat to Aston Villa but insists he has moved on and is ready to lead his side on Saturday against QPR at Loftus Road.

The Black Cats went into Tuesday’s clash against Villa at the Stadium of Light in high spirits after securing back-to-back draws against Middlesbrough and Millwall but, just when the hopes of survival were increasing, the team were thumped 3-0.

Defeat, which was the 18th of the season, has left the north-east outfit rock-bottom of the Championship, four points adrift of safety with just 10 games remaining.

Time is running out for Sunderland to avoid successive relegations and, judging by Coleman’s mood in the post-match press conference after the Villa loss, things are looking bleak for the basement boys.

However, the former Wales boss is refusing to give up hope and is already reinvigorated ahead of Saturday’s trip to take on Rangers, who are 10 points above the bottom three.

“I was lower than a snake’s belly on Tuesday but I’ll be ready on Saturday, I promise you,” he was quoted as saying by chroniclelive.co.uk.

“I didn’t get much sleep on Tuesday, but even when we win I don’t get a lot of sleep! “I have got to pick the players up and be positive for them and make sure they are ready for another go at it on Saturday.”

Sunderland, who are on an eight-game winless run, are 4.00 outsiders to pick up a much-needed three points, a draw is priced at 3.60, while the Hoops are 1.91 favourites.

The reverse fixture earlier in the season ended in a 1-1 draw and the Black Cats have not won a league game at Loftus Road since 2011.