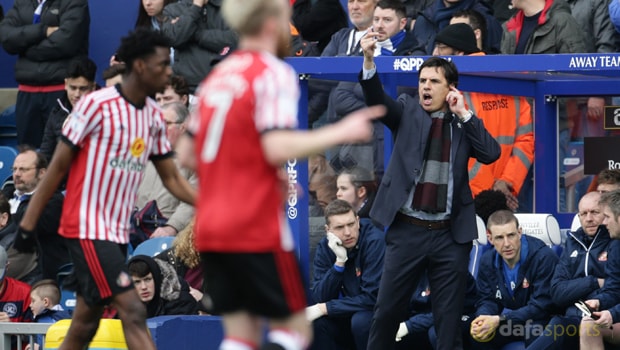 Chris Coleman says Sunderland are already planning for the future with the club keen to tie Joel Asoro and Josh Maja to long-term contracts.

The Black Cats find themselves in a perilous position, currently sitting bottom of the Championship table and in danger of a second straight relegation.

With eight games to go, Sunderland are the 1.07 favourites for the drop, with second bottom Burton 1.08.

Off-field uncertainty means they are yet to discuss the futures of the five senior players who are set to be out of contract in the summer, while 10 more are due to enter the final 12 months of their deals.

Homegrown midfielder Ethan Robson signed a new contract earlier this month and Asoro and Maja are next on the board’s to-do list.

Swedish youngster Asoro has netted twice in his 21 appearances this term, while fellow forward Meja has one strike from his 14 outings.

Coleman looks set to stay at the Stadium of Light regardless of the outcome of their season and he is already planning for next term.

The Welshman sees the young duo as key components of his team going forward and believes they will only improve by continuing their career on Wearside.

“Obviously, Joel and Josh, we see their future as being here and the best thing for them is to stay with us and progress,” said Coleman.

“We want to give both players long-term deals, and I think both of them want to stay and play. “They are young but they will get better, hopefully with us.”