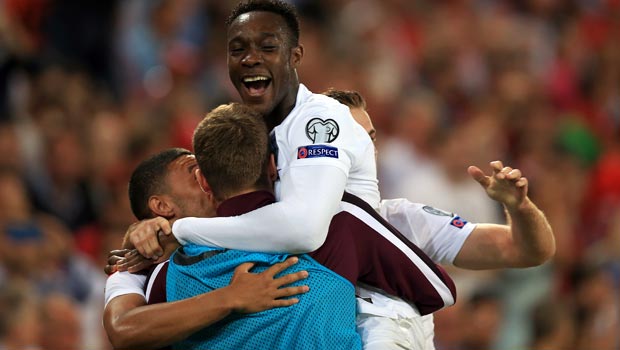 Two-goal hero Danny Welbeck believes England can build on their impressive 2-0 Euro 2016 qualifying victory in Switzerland and carry on improving.

The 23-year-old striker, who moved from Manchester United to Arsenal on transfer deadline day, scored just before the hour mark and in stoppage time in Basel as Roy Hodgson’s side opened their qualifying campaign in the perfect fashion.

In a weak group that also contains Estonia, Slovenia, Lithuania and San Marino, Monday’s game was expected to be England’s toughest encounter, but they came through the test in fine fashion, defending stoutly and counter-attacking impressively, with the pace of Raheem Sterling a feature of their play.

Switzerland had reached the last-16 of the World Cup before being edged out 1-0 by Argentina but produced a below-par performance against an England side that had been mediocre in last week’s limp 1-0 friendly victory against Norway at Wembley.

“It was a good performance and stuff we have been working on in training has really come off and that is a pleasing factor,” Welbeck said after the victory at St Jakob Park. “We had to soak up the pressure when we went one ahead but we defended really well as a team and limited their chances.

“With the players we have got in the squad, we really want to be pushing on. We have got a youthful side and a number of young players in the team. It is good to look forward, we know we can improve massively in each and every single game.”

Welbeck is in line to make his Premier League debut for Arsenal when they play Manchester City on Saturday.

The Gunners are 2.93 to win the match while City are available at 2.40 to take three points from the Emirates Stadium clash.