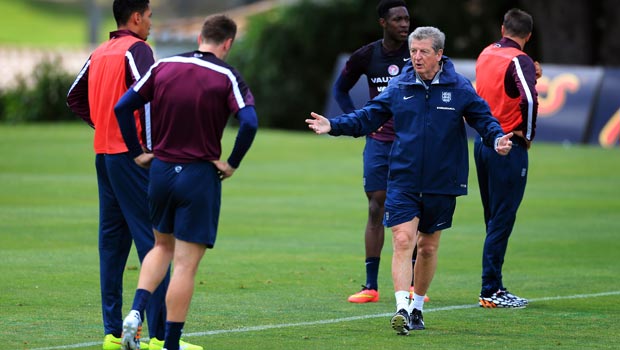 England coach Roy Hodgson says there are places up for grabs in his starting XI as he begins to weigh up his options for the World Cup opener with Italy.

The former West Brom and Liverpool boss has named a relatively inexperienced squad for the tournament in Brazil and says everyone will get the chance to impress before the Three Lions’ first game on June 14.

Hodgson’s squad began training for the World Cup in Portugal this week ahead of the first of three friendly matches against Peru on May 30 at Wembley.

England then face Ecuador and Honduras in Miami before the World Cup starts, and Hodgson says he won’t have a firm idea of his starting XI for the game with Italy until after those three warm-up games.

“I have many ideas but no firm ideas. Not yet. I don’t need to do that yet,” Hodgson said.

Hodgson might not know his line-up for England’s World Cup opener but he is making sure everyone in his squad has done their home work on the Azzurri.

He added: “We are doing a lot of video work in Portugal.

“We will be showing the players in units aspects of the Italian game and how that affects us and what we are going to be wanting to do.

“We are not doing it as individual players. We are talking about how our midfield is going to attack or defend. It will be all the midfielders and not just the four or five who we might choose.”

England are currently priced at 2.98 to defeat Italy in Manaus, with the four-time World Cup winners the favourites at 2.50 while the draw is at 2.90.

Hodgson’s men face Uruguay and Costa Rica in their next two matches and are 1.55 to make it out of Group D.