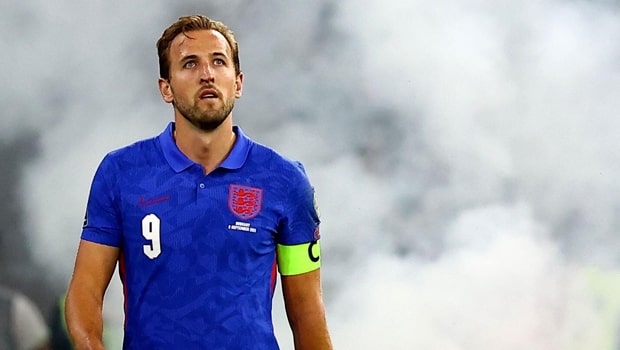 England left it late in Budapest before thumping Hungary 4-0 to make it 4 wins out of four FIFA World Cup Qualifiers played by Gareth Southgate’s side.

The team which finished second behind Italy at the Euros started the game poorly with Hungarian fans singing racist chants at the English players as the game ended goalless at the break.

However, while Spurs striker Harry Kane failed to score from a chance early in the second half, Raheem Sterling scored his 18th Three Lions goal in the 55th minute.

Harry Kane was not to be denied in the 63rd minute while Manchester United defender Harry Maguire added a third six minutes later.

Declan Rice completed the scoring with less than five minutes left on the clock as England prepares to face Andorra and Poland next.

England manager Gareth Southgate revealed rgat he was happy with the game and his players who made a difficult game look comfortable.

“I was very pleased with the first half. The first couple of goals came from turnovers and quick counter-attacks, we used the ball well all night. There is not much between the two halves, they were open and the goals came. We have made a very difficult game look quite comfortable.” Southgate said.

Meanwhile, Spain lost their first FIFA World Cup Qualifying match for the first time in 28 years when they fell to Sweden 2-1 on Thursday evening.

The La Roja were on a 66-game unbeaten run since 1993 and they led early through debutant Carlos Soler but it didn’t last for 2 minutes as Sweden equalised through Alex Isak.

Viktor Claesson scored the winner three minutes before the hour mark as Sweden tops the group with 9 points from 3 games.

Spain’s last loss in the world cup qualifier was by Denmark in 1993. They have won 52 and drawn 14 since then.