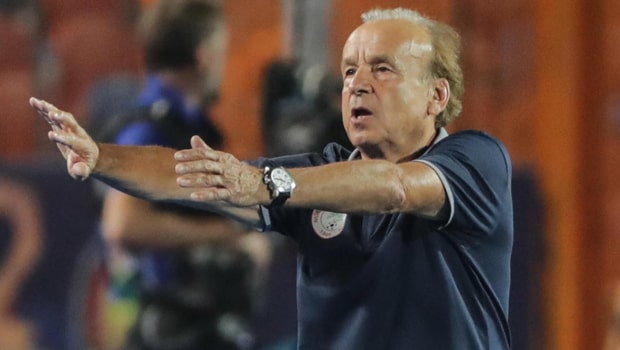 The Super Eagles of Nigeria will begin their qualification for the 2022 FIFA World Cup in Qatar with a game against the Lone stars of Liberia at the Teslim Balogun stadium.

Nigeria, led by German coach, will be playing at the Teslim Balogun stadium in Lagos, the country’s commercial capital.

It was the same venue where the team played her last 2021 African Cup of Nations qualifier against Lesotho after qualification for the tournament to be held in Cameroon in 2022 was secured.

Meanwhile, the German manager while speaking in a pre-match conference on Thursday explained that having monitored the Liberian team, they will not be underrated.

“They played in Tunisia twice and the one other in Algeria and I had my scout there who watched the games. So during our stay in Austria, Liberia had three games in North Africa. They have a team, some of their players are in big clubs so I think we know them a little bit and we already had some video sessions with our players. It is really a good team and we never underrate them or any other teams.” Rohr said on Thursday.

However, Nigeria has not won in her last three games including two back to back friendlies against Cameroon with a draw and a loss.

The AFCON champions led after just five minutes through Slimani and he doubled the lead in the 25th minute from the spot after Djibouti was red carded.

Baghdad Bounedjah was also on the scoresheet from the spot in the first half but Slimani added two more early in the second half before Riyad Mahrez and Ramiz Zerrouki completed the scoring in the 67th and 69th minutes respectively.