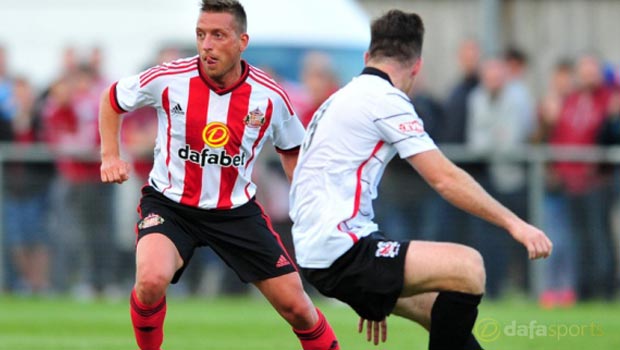 Emanuele Giaccherini’s agent has suggested that the player has lots of options but expects that the 30-year-old will no longer be at Sunderland when the transfer window closes in less than two weeks’ time.

The Italian was not even on the bench for Sunderland’s 3-1 home defeat to Norwich City on Saturday and seems certain to be heading out of the Stadium of Light after enduring an injury-ravaged two years on Wearside.

Giaccherini, who moved to Sunderland in a £6.5million switch from Juventus in July 2013, has only started 18 Premier League games for the Black Cats, scoring four times.

He remains hopeful of featuring in the Italy squad for next summer’s European Championships and could return to his homeland.

His agent, Furio Valcareggi, said: “Time is limited and we’ll see what happens, but he is a top-level figure who needs to play consistently after a season characterised by injuries.

“He lost all of last year and now cannot afford to lose another chance. This is the year leading up to Euro 2016 and he really wants to be there. Could he return to Italy? We’ll see, as anything could happen. He is certainly not lacking for offers.”

Meanwhile, Bournemouth are being linked with Jermain Defoe, who has struggled to fit into manager Dick Advocaat’s favoured 4-3-3 formation.

Sunderland have also distanced themselves from reports suggesting they are keen to sign Kieran Richardson.

Advocaat’s side, 1.63 to be relegated from the Premier League this season, are 4.00 to beat Swansea City on Saturday. The Swans are available at 2.05 to consign Sunderland to their third defeat of the campaign.