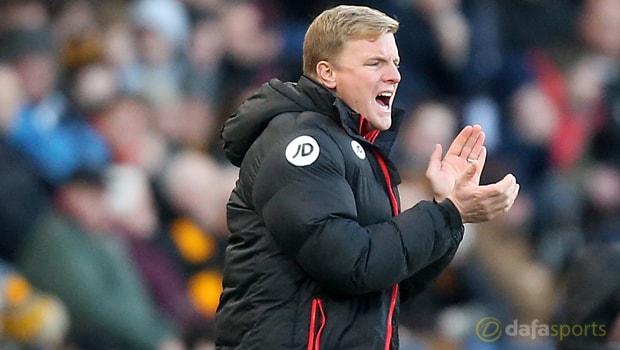 Bournemouth boss Eddie Howe has called for calm within his squad as they look to improve their Premier League position.

After making a host of changes for the FA Cup defeat at Millwall, the Cherries recalled a number of their stars for Saturday’s trip to Hull.

However, they struggled to find their rhythm and eventually went down 3-1 at the KCOM Stadium.

It has been a strange season for Howe’s men as despite at times lacking consistency, they currently sit comfortably in 11th, nine points clear of the bottom three.

Their position has only helped contribute to their manager’s burgeoning reputation within the game but, having won only one of their last six outings, he will be keen to see them get back on track on Saturday against Watford.

Howe admits his players have every right to be pleased with the situation they find themselves in, especially as for many this is only their second season of top-flight football.

The 39-year-old is keen not to get carried away, though, insisting that they need to keep working hard if they are to continue on their current upward curve.

Howe said: “I think if you are a neutral and looking at AFC Bournemouth’s season, you would probably say it has been a great season so far.

“When you are living it every day and you are suffering defeats, it doesn’t feel that way.

“Being realistic with our expectations and what we can achieve has always been important. But I do believe with the players we have, we can do good things this season.”