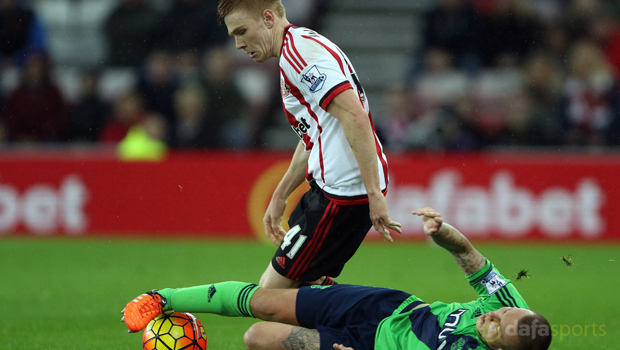 Sunderland manager Sam Allardyce believes Duncan Watmore is capable of making a big impact on the club this season.

The England U21 international has enjoyed a run of first appearances this campaign, featuring five times in the Premier League and netting on his top-flight debut against Norwich City.

Allardyce handed the youngster his first league start in Saturday’s 1-0 reverse against Southampton at the Stadium of Light.

Despite that result going against his team, the Sunderland boss has seen enough in Watmore to lead him to believe he can make real difference this season.

According to Allardyce, Watmore offers something he doesn’t have elsewhere in his squad.

“I think that he’s got a little bit of something we haven’t got here,” said Allardyce. “He’s very quick and he likes to get in behind defenders, so hopefully he will be a big part of the squad this year.”

Watmore also scored in a 6-3 Capital One Cup victory over Exeter City at the Stadium of Light and the Sunderland boss is impressed by his eye for goal.

Having made his full Premier League debut against the Saints, Allardyce is hoping to see strong mental resolve from the player.

“He can score a goal and has scored a couple of goals so hopefully if he gets to play more he will start putting the ball in the back of the net.

“Healthy competition for places is always a good thing and he will be disappointed [by Saturday’s defeat], but he’s made his full debut and hopefully he can go on to better things from here.”

Sunderland are 1.20 to be relegated from the Premier League this season while they are 6.50 to win their next game, away at Crystal Palace on November 23rd.