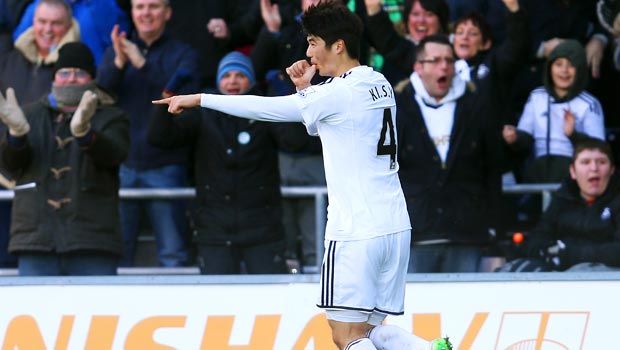 Swansea manager Garry Monk has praised his squad after they came from behind to beat Manchester United 2-1 for the second time this season.

The Swans have never before done the double over United but showed great spirit to back up their opening-day victory at the Liberty Stadium on Saturday.

Monk’s side made a positive start to the game when Bafetimbi Gomis saw his header cleared off the line by Ander Herrera.

However, United, against the run of play, took the lead through Herrera, who capped off a flowing counter attack by drilling into the bottom corner.

The Red Devils’ lead didn’t last long though as Ki Sung-Yeung equalised within two minutes of falling behind to raise spirits around the Liberty Stadium.

United were much improved in the second half but Swansea managed to sneak a winner after Jonjo Shelvey’s shot deflected off Gomis’ head and beyond David De Gea.

The Welsh outfit held on for all three points and made what Monk hailed as “history” for the club after claiming all six points off Louis van Gaal’s side this season.

Monk said: “These are the type of things you remember, stuff to tell the grandchildren.

“To make history for this club is fantastic for this team to be remembered – and it is no mean feat.

“Everyone connected with the club should be extremely proud of that.”

Ki, who has scored in both wins over United this term, admitted that beating them for a second time made it a “special day”.

Ki said: “It’s amazing we won twice in the season against Manchester United.

“I don’t know if we can do it next season, but this season it was unbelievable.

“It’s a special day for myself and then all the team-mates.

“Before the game the gaffer just said to us ‘let’s make history, we can win twice against Manchester United.”