Bundesliga: Borussia Dortmund off to a flyer 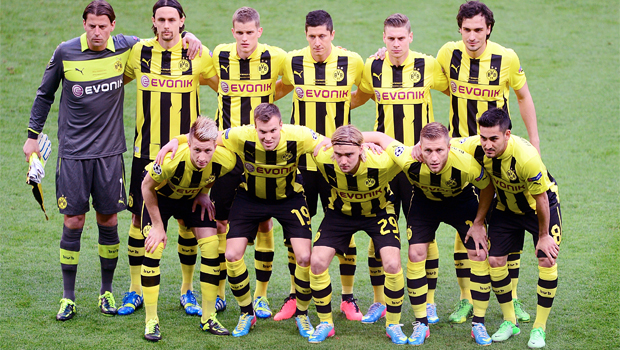 Borussia Dortmund got their Bundesliga campaign off to the best possible start by thrashing Augsburg away on Saturday.

Despite a fantastic campaign last season, the Dortmund club still had to play second fiddle to their big rivals Bayern Munich as they swept all before them. And, if they are to stop the Bavarian’s domination this term, a good start was essential.

They got just that, with new striker Pierre-Emerick Aubameyang scoring a hat-trick in the 4-0 romp at Augsburg, normally a hard place to get points at.

The Gabon international, signed from St Etienne for a reported 13m euros, could not have been more impressive up front, a first-half diving header followed by a brace of second half goals, one from close range and the other an ultra cool rounding of the keeper to complete the hat-trick 11 minutes from time.

More importantly, the way that Aubameyang latched onto Robert Lewandoski’s pass for his third goal, shows that they can be a strike pairing to be reckoned with for the rest of the season.

“That was a super start for me,” Aubameyang said afterwards. “The intensity in the league here is much higher than in France. Our aim is to work hard and see what is possible in this season.”

Lewandoski got the fourth thanks to a penalty, and might yet not regret his blocked move to arch-rivals Bayern Munich.

Pep Guardiola saw his side beat Borussia Moenchegladbach on Friday evening, but Dortmund coach Juergen Klopp will fight every inch of the way to try and wrestle the title back.

“I told my players it would be tough and there are not many teams who will win 4-0 here,” he said after the final whistle in Augsburg.

“We scored some great goals and finished off the game.”