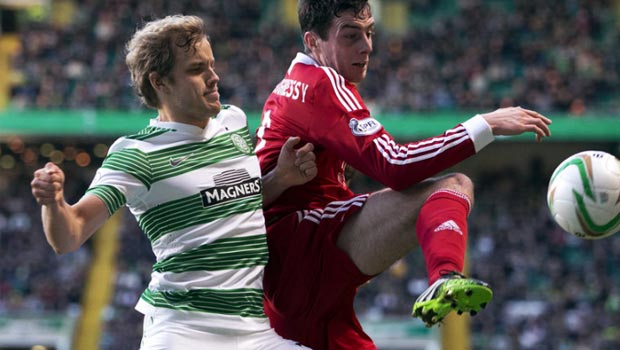 Aberdeen face a tough task away against holders Celtic in the Scottish Cup fifth round.

The draw was unkind to the Dons as they saw their path to the quarter-finals hit the stumbling block that is Celtic, who are not just defending champions but also winners on no less than 36 occasions.

Aberdeen themselves have proudly lifted the trophy seven times in the past, but the last time was in 1990 and their supporters know they have been dealt a tough tie on the weekend of February 8-9.

However, Aberdeen have improved of late under the guidance of Derek McInnes who took charge in April, and this will be a true test of just how much they have progressed since then.

A 1-0 victory at Partick Thistle last weekend guaranteed a visit to Parkhead where just a week earlier they held out until late on when the hosts scored twice to come out on top 3-1.

The Bhoys have been banging in the goals and thumped Hearts 7-0 on Sunday, so will fear no one en-route to another potential final. But as has been proved in the past, cup matches can and do provide upsets season after season, so McInnes will drum that into his players.

“Most people will expect Celtic to get through against us but I think it is a good thing to go and take a challenge like this head on.”

To take their minds off such a big game, the Dons have the side issue of a League Cup semi-final encounter with St Johnstone in Edinburgh the previous week, and will fancy their chances of making it all the way in that competition at least, given that the following day’s last-four encounter is between Hearts and Inverness.

Hampden Park is being redeveloped ahead of the 2014 Commonwealth Games so the Scottish Cup final is to be staged at Parkhead which is another big incentive for Celtic to go all the way.