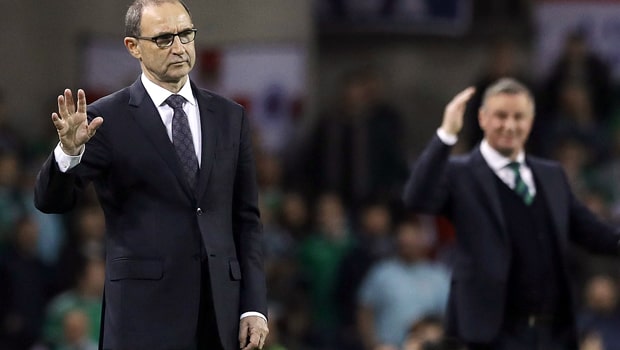 Martin O’Neill and Michael O’Neill left the Aviva Stadium with contrasting opinions after watching the Republic of Ireland and Northern Ireland play out a dour stalemate.

The pair met in a friendly encounter ahead of UEFA Nations League games against Denmark and Austria respectively and it was a forgettable affair.

The visiting North created the best of the chances, with home keeper Darren Randolph doing most to keep the game scoreless.

Martin O’Neill had to endure a chorus of boos at the end and has now won only one of his last ten games for the Republic, who remain in transition according to the former Celtic manager.

“We’re in a transition at this minute, I think it’s the 11th new cap we’ve made this season, and I think these boys need a little bit of time to settle in but we didn’t do well enough,” said the Republic boss.

“I understand [the boos]. I think we can turn it around, we’re in a position of transition and hopefully the players will bed down, we’ll have some of our more experienced players coming back now.”

Opposite number Michael O’Neill feels the Nations League has served a purpose for his squad, despite Northern Ireland’s relegation being confirmed via other results on Thursday night.

Qualifying for Euro 2020 is the ultimate aim and he believes his team will have a legitimate shot at that.

“That’s disappointing [relegation], but we used the competition to try to get some fresh blood into the team, I think we’ve done that. We don’t have the biggest resources, so I think we have to,” he said.

“It’s unlikely we will get a play-off for 2020, but we’re building a team for automatic qualification and we’re well on the way to managing to compete for that.”