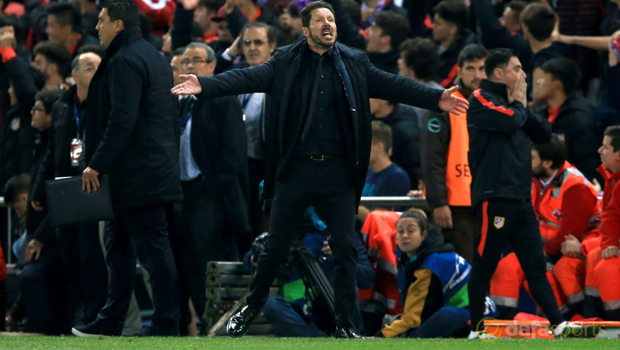 The Catalan giants’ loss of form continued at the Vicente Calderon on Wednesday night as Antoine Griezmann scored both goals for the home side to send them into the Champions League last four with a 3-2 aggregate success.

Atleti hounded their opponents from the first whistle until the last inside a fired up Calderon, disrupting the normally fluid attacking momentum of Barcelona and nullifying the threat posed by Lionel Messi, Luis Suarez and Neymar.

Griezmann headed into the top corner before half-time, redirecting an exquisite cross from Saul Niguez beyond the dive of Marc-Andre Ter Stegen.

Barca tried hard to regroup in the second half but they could not break down the Atleti barrier and Griezmann doubled the advantage from the penalty spot after Andres Iniesta’s hand ball late on.

Messi went close with a last-gasp free kick that would have sent the tie into extra time but the holders bowed out, the curse of retaining the Champions League trophy yet again proving too much.

Simeone felt his team had never given up hope in the tie and the Argentine felt it was a thing of beauty to see Atletico restrict one of the world’s best teams so effectively.

“We never stopped believing, we never give up what we want to do,” Simeone said. “It was lovely to watch from the touchline. These moments won’t come back because they are unique in football.”

Barcelona, meanwhile, have now lost three of their last four games in all competitions and their manager Luis Enrique said the blame for European elimination lies with him.

“We have not had our best day, but in the second half we have had chances. It was not to be. Atletico deserve praise.”

Atletico Madrid are 4.00 to win the Champions League this season. Bayern Munich are 2.58 with Real Madrid 3.40 and Manchester City 6.50.