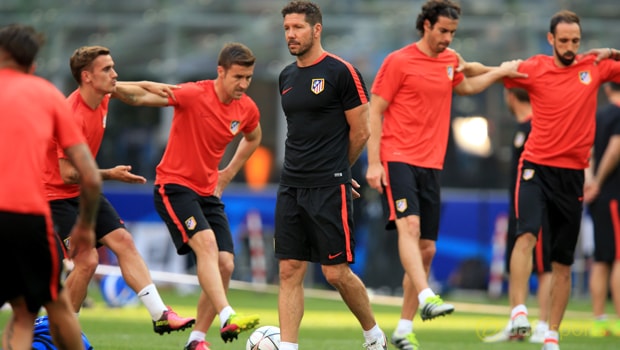 Atletico waited 14 long years for a win against their illustrious rivals before Simeone came along but they haven’t lost a La Liga game to Real since the 2012/13 season.

Los Blancos may have dumped Atletico out of the Champions League in each of the past three seasons, twice in finals, but Simeone insists the balance of power in the Spanish capital has altered.

“For a long time we knew we were inferior to them,” Simeone said. “And now we compete on the same level. The balance has changed.

We know our virtues and our defects.” The clubs met in Lisbon in the 2013/14 Champions League decider, with Atletico seconds from victory before Sergio Ramos headed home to force extra-time and Real ran out 4-1 winners.

In May, they drew 1-1 in the San Siro but Real once more emerged with the trophy after a penalty shootout.

Zinedine Zidane’s team are top of La Liga, undefeated after 11 games this season ahead of their trip to the Vicente Calderon.

Atletico are sixth, six points down on their derby rivals following two defeats in their last three league games.

Despite worries over the fitness of leading striker Antoine Griezmann, Simeone says the French international is ready to go.

“[Griezmann] is good,” Simeone said. “He had some more treatment [on Friday] but he is fine. More than proud, I am lucky to have a player with such talent, who wants to improve always.”