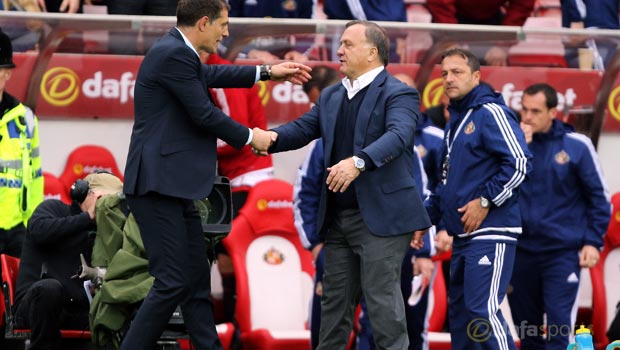 Sunderland manager Dick Advocaat tried to focus on the positives after his side were pegged back in a 2-2 draw with West Ham at the Stadium of Light on Saturday.

Sunderland’s search for a first Premier League win of the season goes on, despite the home side getting off to a dream start and leading 2-0 after a quarter of the game.

That was as good as it got and Sunderland were left frustrated as mistakes and ill-discipline allowed West Ham to get back into the game.

Carl Jenkinson pulled a goal back before the break and ten minutes after the interval Lens earned a second yellow card, leaving Sunderland with ten men for the final 35 minutes.

A mistake by goalkeeper Costel Pantilimon allowed Dimitri Payet to equalise on the hour but Sunderland held out to take a share of the spoils.

Advocaat says his players can take belief from their first half display against a West Ham team that has been particularly strong away from home this season.

“The performance has to lift the spirits. We showed if we work hard, we can get points and results, because West Ham are a good side and we know they have had good results in their away games, so I have to give compliments for their performance,” said the Black Cats boss afterwards.

The result was enough to lift Sunderland off the bottom of the table, where they were replaced by North East rivals Newcastle, who suffered a 6-1 defeat at Manchester City.