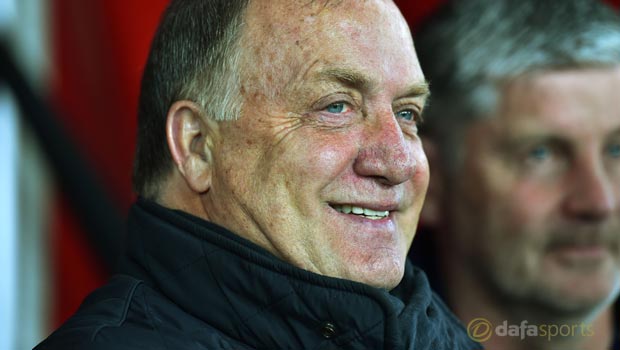 Sunderland manager Dick Advocaat believes his side have started slowly this season due to their failure to bring in fresh faces early in the summer transfer window.

The Black Cats, who are priced at 1.29 to be relegated, are still without a victory after six games of the new Premier League season and sit bottom of the table with just two points to their name.

The north-east outfit have tasted victory once but that solitary win came in the Capital One Cup second round against League Two outfit Exeter City. Advocaat’s men will face Manchester City on Tuesday evening in the third round of the same cup competition.

The Dutchman added eight players to his squad over the summer as he looked to build a stronger team following their poor campaign in 2014-15, which saw Sunderland avoid the drop with one game to spare.

However, only full-back Adam Matthews was signed in time to link up with the rest of the squad at the start of pre-season in July.

Sebastien Coates, Jeremain Lens and Younes Kaboul all arrived later and met up with their new team-mates for the pre-season trip to Canada.

Midfielders Yann M’Vila and Ola Toivonen were signed in August, while Fabio Borini and DeAndre Yedlin did not arrive until September.

The 67-year-old believes the club is playing catch-up as a result of dragging their heels in the transfer market and has admitted their bad start is partly due to the fact he has had less time to work with the new arrivals.

Advocaat said: “This is not a negative squad, it is a very positive one. However, you have to take into consideration the way we started in July (without some of the new players) until a month ago (when they arrived)].

“That is not the best way to prepare. Now they are getting used to the pace and we can see that on the stats.”

The Black Cats can be backed at 67.00 to win the Capital One Cup outright ahead of Tuesday’s meeting with Manchester City at the Stadium of Light.