Derek McInnes not in Sunderland talks 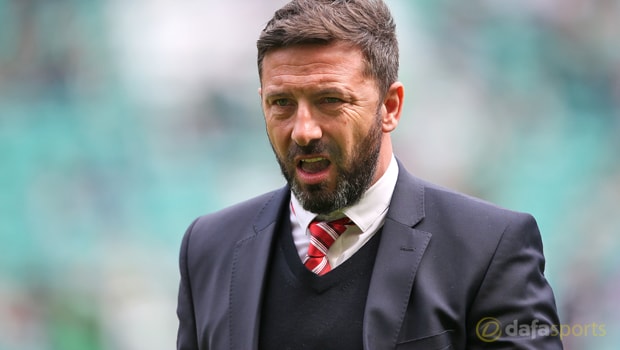 Aberdeen’s new majority holder Dave Cormack has denied reports claiming manager Derek McInnes is in talks with Sunderland about the vacant position at the Stadium of Light.

Sunderland have been searching for a new manager ever since Scottish tactician David Moyes resigned last month after the club finished bottom of the Premier League.

Appointing a new boss is the main priority right now and the club have been linked with several faces, including former striker Kevin Phillips, ex-Boro boss Aitor Karanka and Alan Pardew.

However, McInnes has been heavily linked with the vacant post in recent weeks and it was claimed on Tuesday that he was in talks with Sunderland about taking over.

But, Cormack has been quick to respond to these rumours and he has categorically denied the Aberdeen boss has started negotiations with the recently-relegated team.

He told local radio station Original FM: “Derek is under contract at Aberdeen for two years.

He and his family are happy here, no team, including Sunderland, has been given permission to talk to Derek.

To talk to him there are certain conditions that have to be met, financially or otherwise.

“Then two, Derek needs to want to talk to them, but that’s the order.

We don’t need their money at all. We had a board meeting yesterday and the money is there [to invest in the team].”

Sunderland are 15.00 to win the Championship next season while Aston Villa and Middlesbrough are priced at 8.50 and 9.00 respectively to lift the trophy.