No derby fear for Sadio Mane 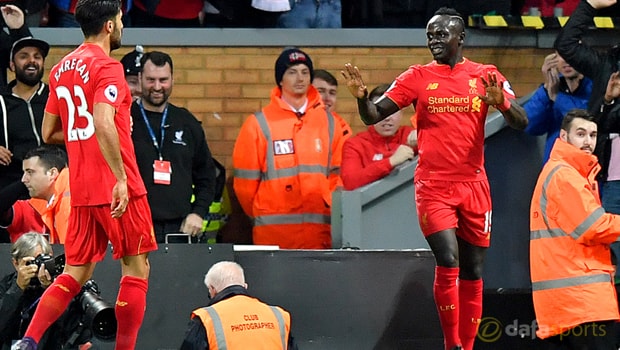 The local rivals meet for the first time this season with the Reds hoping to kick on from Wednesday’s comfortable 3-0 victory at Middlesbrough by closing the gap between themselves and leaders Chelsea at the top of the table.

Everton themselves sealed a morale-boosting victory in midweek, beating Arsenal 2-1 but will be without skipper Phil Jagielka for the game due to his sending off against the Gunners.

Monday’s clash will mark Mane’s first Merseyside derby and he will be looking for another impressive performance, as he continues to try and endear himself to the Liverpool faithful following his summer move from Southampton.

The Senegalese admits he has been impressed by what he has seen from his side so far this season and believes that if they keep their focus, they have every chance of being in the title mix.

Ahead of Monday’s game, the 24-year-old says they should not fear the Toffees and is confident they have what it takes to claim all three points.

“I think we have a bit of distance to Chelsea, but we all know what can happen in football,” he told Liverpool’s official website.

“For us, the most important thing is not to think about where they are, it’s to focus on ourselves and go game by game, and try to win the games, until the end of the season.

“I think in the Premier League everything is quite the same, it [Everton] is a tough game, but why not? I think with the quality we have we can beat every team in the league, so I don’t know why we can’t go there and win.”

Liverpool are the 1.91 favourites to win at Goodison Park, with the draw 3.60 and Everton the 4.20 outsiders.