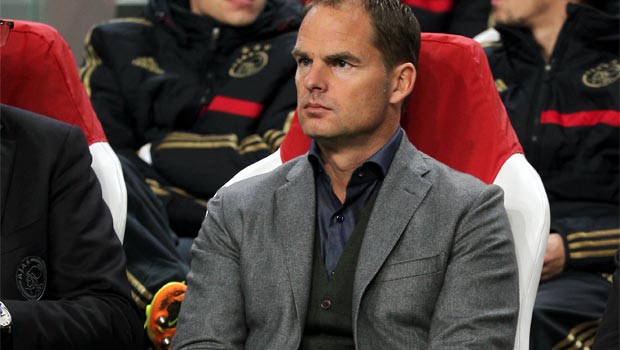 Ajax boss Frank De Boer feels his side have an even chance of beating Milan on Wednesday night to reach the knock out stage of the Champions League.

The Netherlands outfit travel to the San Siro sitting in third place in the Group H standings, with seven points from their five games.

Victory over the mighty Barcelona last time out gave them a lifeline but the Italians are one place and one point better off as they head into the group finale.

A draw for the hosts would therefore be enough to see them join the Catalans in the last 16 and send the Amsterdam giants into the Europa League.

It is a daunting task for Ajax, but De Boer hopes that his charges can feed off the nervous energy and lift their game when it matters most.

“Some of the younger players perhaps feel the tension more,” he said.
“But this has to be transformed into something positive.”

Milan are favourites to win the match and progress in the competition but they have not exactly been pulling up any trees domestically this season.

Massimiliano Allegri’s side are currently ninth in Serie A, having won just four of their 15 league games this term, and are already 22 points behind table-topping Juventus.

And, despite admitting that Wednesday’s opponents have rallied in recent weeks, the former Barcelona stopper feels that there will be no favourites on the night.

“Milan are playing on home turf and are a great side, but I think we each have a 50 per cent chance of qualifying,” added De Boer. “The Rossoneri are improving, but we’re in a great moment of form too.”