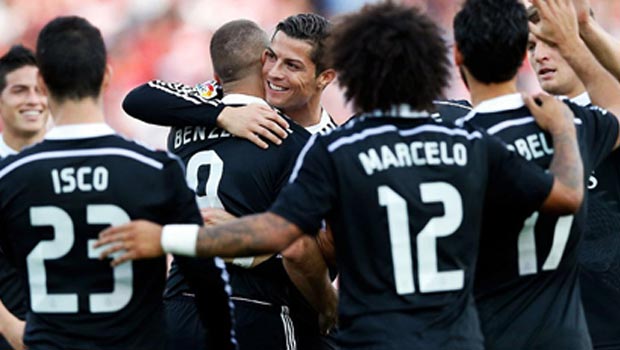 The Spanish giants are now just four wins away from matching the world-leading mark, set by Brazilian outfit Coritiba in 2011.

They had to work hard to defeat manager-less Almeria however, despite Isco giving the La Liga leaders a first-half lead.

Almeria restored parity thanks to a fabulous low strike from midfielder Verza before Gareth Bale headed the visitors back in front before the break.

Iker Casillas had to save a second half penalty before Ronaldo fired home a quick brace in the final ten minutes to secure the points and steer Madrid five points clear of second-placed Barcelona.

Ancelotti says while the world record will not it result in any silverware, it is helping to instil confidence in his side.

“The record is important, because it says that we’re doing things very well. It hasn’t brought us any silverware, but it has given us a lot of confidence,” the Madrid boss declared.

Real concluded their Champions League grout with another resounding victory against Ludogorets in midweek, becoming only the sixth side to win all six of their group games.

The European champions remain favourites at 3.95 to become the first team in the modern era to successfully defend the Champions League.

The victory over Almeria brought down the curtain on their 2014 La Liga fixtures with Ancelotti now taking his all-conquering team to Morocco for the Club World Cup as they try to move ever closer to setting a new world record in the process.