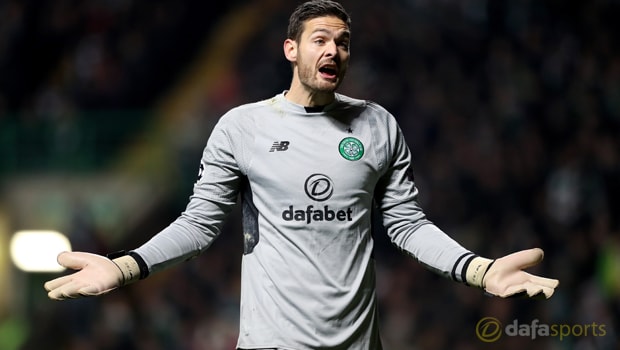 Craig Gordon insists Celtic must show they are willing to be ‘relentless’ in their pursuit of domestic bliss this season by beating Aberdeen in the League Cup Final.

The Hoops have not tasted defeat in Scottish football since Brendan Rodgers took over as manager and they can claim the first silverware of the new era by downing the Dons.

Midweek defeat against Barcelona ended Celtic’s interest in European football for this season but experienced stopper Gordon believes they have learned plenty from their continental adventure.

Securing what would be the 100th major honour in Celtic’s history is the ideal way to close the first chapter in Rodgers’ tenure, says Gordon.

“We have done very well to put ourselves in this position. We want to be relentless and keep going and win as many matches between now and the end of the season as we can,” he said.

“We have worked very hard in the first part of the season to get to a cup final, to play some very difficult games in Europe and we want to win this one.” Celtic have already beaten Aberdeen twice this season on league duty.

They were 4-1 winners at Parkhead in August before narrowly coming away with a 1-0 verdict at Pittodrie last month.

Derek McInnes’ side have been Celtic’s nearest pursuers in recent times and Gordon is anticipating another tough challenge at Hampden.

He says Celtic must show they are the dominant force in Scotland be imposing themselves on the game.

“We have come out on top but they have been very close games. Even at Celtic Park, the scoreline was probably a little flattering towards us so we know we know it is going to be very tough,” he added.

“They have good qualities and we have to be at our very best to make sure we are containing that but also to go ahead and try to dominate the game and win the match.”