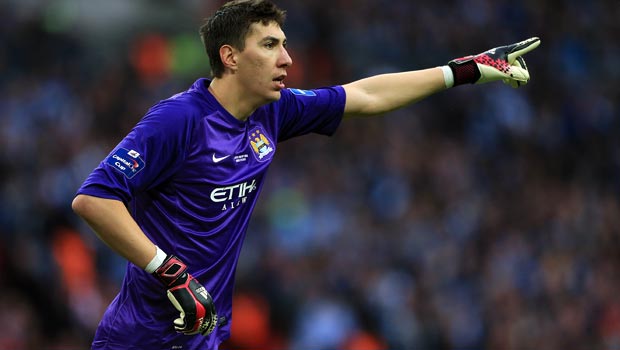 Goalkeeper Costel Pantilimon claims he is joining a Premier League club with “good ambition” after agreeing to move to Sunderland on a Bosman free transfer when his Manchester City deal expires this month.

The 27-year-old Romania international has been a bit-part player at the Etihad Stadium over the past three seasons with England’s first-choice custodian Joe Hart ahead of him in the pecking order.

Pantilimon did have a chance to shine midway through last season when City boss Manuel Pellegrini promoted him to the first team in order to take Hart out of the firing line following several high-profile mistakes.

And while he performed admirably, Pantilimon finished the campaign back on the bench behind Hart as City went on to lift the Premier League title.

However he did start the Capital One Cup final at Wembley in early March when City came from behind to ironically defeat his new club Sunderland 3-1 at Wembley.

Following a run of just 29 appearances at City, Pantilimon is looking forward to challenging Vito Mannone for a regular number one spot at the Stadium of Light, as the Black Cats look to build on their strong finish to last season when they produced an historic escape from relegation to finish 14th.

“It is a great privilege and honour to join a club like Sunderland. They have an amazing history and tradition and of course passionate fans,” he told Sunderland’s official website.

“When I left Manchester City, it was important that I chose a club with good ambition and a head coach who has the hunger and desire to take the team forward.