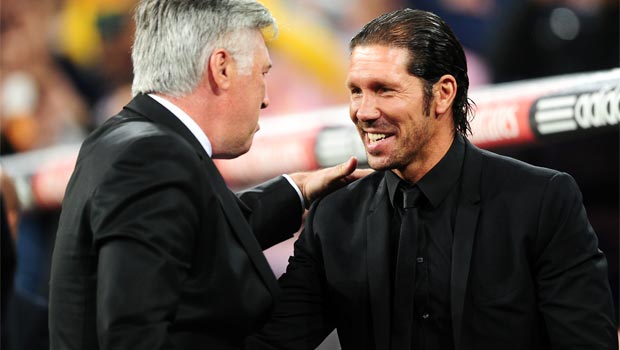 Atletico Madrid face a monumental task if they are to overturn a three goal deficit and reach the Copa del Rey final at the expense of city rivals Real Madrid, but boss Diego Simeone has refused to give up on the trophy.

Atleti were beaten 3-0 in the first-leg at the Bernabeu but Simeone feels the tie is not over just yet as they prepare for the visit of their city rivals on Tuesday.

“Qualification will be difficult but nothing is impossible in life,” he told the press on Monday.

“We have to focus on improving. The team fight, play, work and do not look for excuses.

“I always said I want an Atletico team that made it uncomfortable [for Real] and we are getting there.”

Los Colchoneros have a poor record against Real at the Vicente Calderon, having lost their last seven fixtures against Los Blancos at home.

However, Atheltico have not lost at home this season in all competitions and they did manage to beat Real 1-0 at the Bernabeu in La Liga in September.

Simeone will also have to cope without a number of key men as goalkeeper Thibaut Courtois remains sidelined with a back problem, meaning Dani Aranzubia will retain his place in the starting line-up starting in the shock 2-0 defeat at Almeria.

Aranzubia will be keen to impress having been sent off on Saturday, while he was also arguably at fault for Almeria’s opener.

Atleti will also be without suspended star Diego Costa, while David Villa is also missing due to a hamstring problem.