Neymar out of Copa America 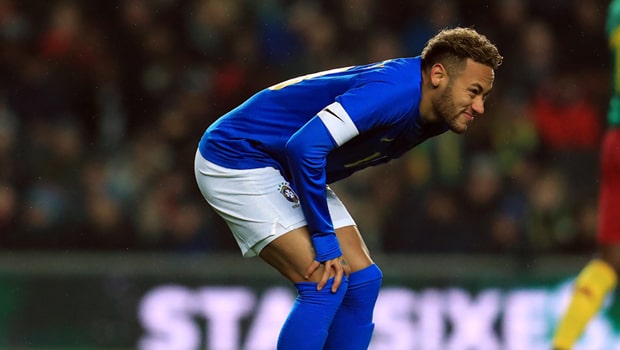 Brazil have confirmed former captain Neymar will play no part in the Copa America on home soil due to a ruptured ligament in his ankle.

The Paris Saint-Germain forward suffered the injury during his side’s 2-0 friendly win over Qatar. Brazil coach Tite initially believed the injury would not be “very serious” but further tests have resulted in Neymar being ruled out of the tournament.

The 12-team Copa America tournament starts on Friday, June 14, with hosts Brazil facing Bolivia, while the final is to be played on July 7 at the Maracana in Rio.

“After suffering a sprain in his right ankle during last Wednesday’s game against Qatar, Neymar was evaluated and subjected to complementary imaging tests that confirmed ligament rupture in the ankle,” a statement from Brazil’s football federation read.

“Due to the seriousness of the injury, Neymar will not have the physical conditions and sufficient recovery time to participate in the Copa America Brazil 2019.”

The 27-year-old forward, who has scored 60 goals for Brazil in 97 international appearances, was last month stripped of his role as captain following disciplinary issues that included a ban for lashing out at a supporter.

The world’s most expensive footballer also missed three months between January and April earlier this year after breaking a metatarsal in his right foot playing for his club. Brazil are attempting to win South America’s continental tournament for the first time since 2007.

It isn’t Neymar’s first setback on home soil as he also missed the World Cup semi-final against Germany in 2014 with a back injury, with Brazil enduring a nightmare 7-1 thrashing against the eventual tournament winners.