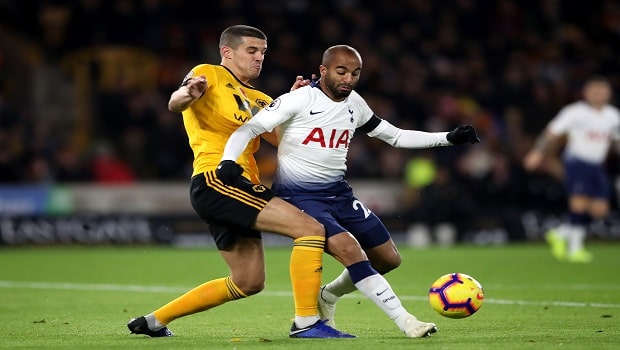 Captain Conor Coady is confident Wolves can get back to winning ways this weekend, despite going up against top-four hopefuls Arsenal.

The Molineux outfit made a strong start to life back in the Premier League as they continued to build momentum after winning the Championship title.

Wolves lost just one of their opening eight Premier games, but they have since lost each of the last three against Watford, Brighton and Tottenham.

Nuno Espirito Santo’s side sit 11th and still look more than comfortable but they are in danger of slipping further down the standings this weekend.

They travel to the Emirates to face an in-form Arsenal side, who have lost just one of their six home league games this term. Despite the difficulty of the task ahead, Coady insists Wolves remain confident they can end their losing streak in north London.

“It’s a huge game for us, we’ve been beaten for three in a row and we need to put that right at some point – it doesn’t matter if it’s Arsenal away, we have the same mentality of needing a win,” Coady said.

The West Midlands outfit trailed 3-0 in their most recent outing against Spurs but they showed resilience to fight back with two late goals, although they ended up going down 3-2.

Coady admits they need to tighten up at the back if they are to return to a more positive path. He added: “I thought we started the game pretty brightly, we moved the ball well, we were doing what we wanted to do.

“We’ve conceded a sloppy goal, we need to look at it and improve. We’ll learn and get better this week.”