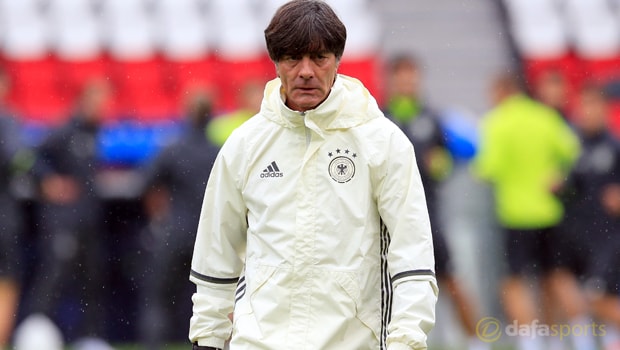 Germany boss Joachim Low insists his side are slowly improving as a team but he admits his side will be up against it in the Confederations Cup final against Chile on Sunday night.

Low decided to take a young team to the tournament in Russia as he looks to develop the next generation ahead of more international success.

His team have grown as a unit throughout the tournament and his approach has worked well in the past.

Low is not a fan of the Confederations Cup and he decided to rest the likes of Manuel Neuer, Mats Hummels, Jerome Boateng, Toni Kroos and Sami Khedira.

Youngsters Leon Goretzka, Timo Werner and Lars Stindl have all impressed and Low admit this team have improved massively since the first game.

However, Chile are looking to win their third major trophy in as many years and the German is expecting a tough game this weekend.

He told reporters: “The boys are having fun, they are hungry for success. You can really feel that.

I think what we are seeing is the creation of a team here. “Chile are the strongest opponents in this tournament, we know them pretty well and we expect them to go for it in the final.

“They will be trying flat out to pull it off, as they are coming to the end of their season, and we will have to try and counter that.

“We know the Chileans are flexible in their game. They have been pursuing their own style for many years now, a very good and positive development.”

Germany are 2.50 favourites for victory, with the draw 3.30, while Chile are available at odds of 2.88 to win the match.