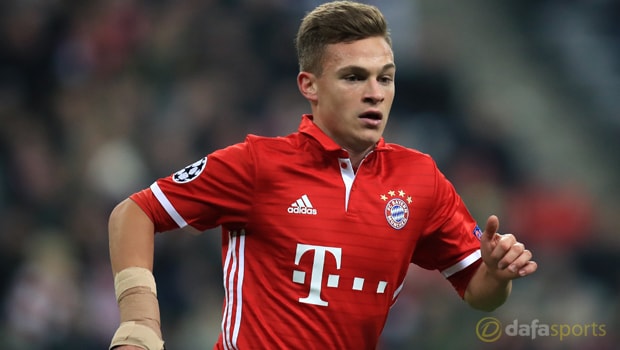 Bayern Munich star Joshua Kimmich insists he is happy to be at a “fantastic” club but he admits he wants more first-team football next season.

The Germany international had been linked with a move away from the Allianz Arena earlier this year, with a host of top European clubs ready to make their move.

Both Manchester City and Manchester United were interested, while Atletico Madrid were also planning talks this summer.

However, manager Carlo Ancelotti managed to tempt him to stay put and he is now hoping to break into the first team on a regular occasion.

Kimmich, who can play in both midfield and defence, may benefit from Phillip Lahm’s retirement, while Xabi Alonso also decided to hang up his boots.

He still made 40 appearances in total last season but Kimmich is confident his experiences with the national team can force him into Ancelotti’s plans.

He told L’Equipe: “In the last two years, I played more times than a number of people had, I think I’ve developed my game and Bayern are one of the best three clubs in the world.

“Few players have the chance to become part of this club. It’s absolutely fantastic to be part of Bayern.

“What’s important now is to play. And, for the moment, I prefer to play at right-back than to be on the bench.

“I’m playing as a midfielder at Bayern and right-back with the national team. Every two months, I have to get re-accustomed to the position.

But my feelings as a right-back are getting better thanks to the time I spend with the national team.”

Kimmich will of course be determined to help his club win more silverware next season, with an improvement in the Champions league perhaps a priority and Bayern can be backed at 6.50 to win Europe’s elite competition.