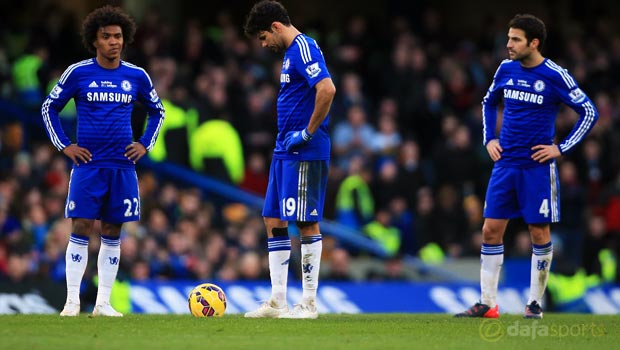 Chelsea playmaker Cesc Fabregas says his side cannot afford to lose concentration in their bid to win this season’s Premier League title.

The Blues were excellent during the opening half of the campaign but, despite currently sitting six points clear of Manchester City, have looked vulnerable at times so far in 2015.

Although they have already won the Capital One Cup, things could have been so much better for Jose Mourinho’s men.

However, defeats to Bradford and Paris Saint-Germain saw them crash out of the FA Cup and Champions League respectively, to end their dreams of a possible quadruple.

They remain the clear 1.06 favourites to win the title but upcoming games against Manchester United, Arsenal and Liverpool mean there is still ample opportunity for them to slip up.

Fabregas insists his side are not getting ahead of themselves and is adamant that, despite their advantage in the standings, they cannot afford to take their foot off the gas.

“Now we have to fight hard to win the Premier League and make this season a great year,” the Spaniard is quoted as saying by the Independent.

“We still have the chance to win the double [Capital One Cup and Premier League], and for that reason we cannot relax for a moment.”

With eight games left the Blues have the perfect chance to edge their way closer to the title on Saturday when they face Stoke, a game they are 1.29 to win, with the draw priced at 5.25 and the Potters 13.00.