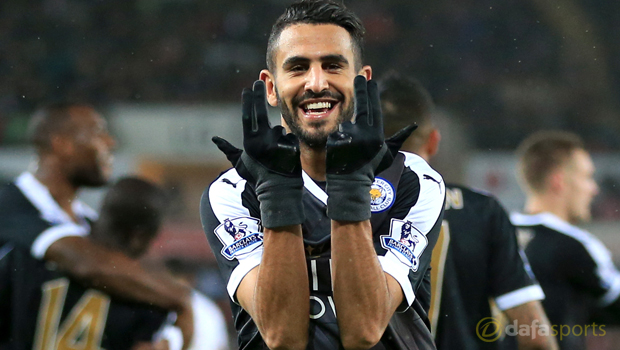 Leicester boss Claudio Ranieri expects Riyad Mahrez to remain with the Premier League champions amid speculation over his future.

Mahrez, who won the PFA Players’ Player of the Year award last season, has been linked with the likes of Barcelona and Arsenal, among others, in recent weeks.

N’Golo Kante’s move from Leicester to Chelsea has increased the speculation regarding Mahrez’s future, but Ranieri is confident the Algerian will remain with the Foxes.

“Only Kante wanted to go – that’s okay. But I understood him, he came from a little team in France [Caen] and had a fantastic season.

I said to him stay with us and have another year with us but he wanted to go,” Ranieri told reporters. “Everybody here is happy and, yes, he [Mahrez] wants to stay.

No other players will go away – we will stay together.

The football continues without Riyad or without Kante but Riyad will stay with us for all of the years. “It’s important to maintain the group, with the spirit, with the humility.

That’s important for me.” Star striker Jamie Vardy has already rejected Arsenal in order to remain at Leicester and if Mahrez does stick with the club it will provide a huge boost to Ranieri, as Leicester look to defend their league title and compete in the Champions League.

The Foxes open their Premier League season at newly-promoted Hull on August 13 and they are 2.30 to come away with all three points.

Leicester are 26.00 to win the Premier League outright and 6.00 to finish in the top four next term.