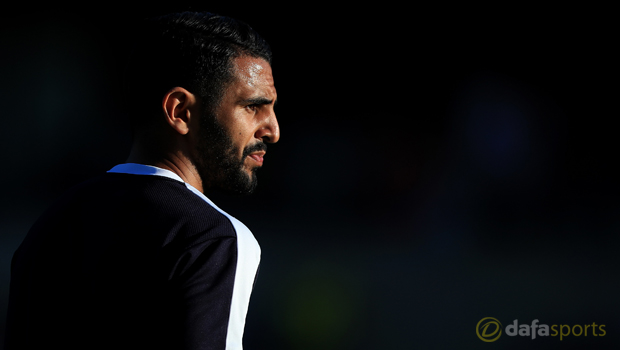 Claudio Ranieri has urged Riyad Mahrez to hold off leaving Leicester City until next summer and continue to improve his game at the King Power Stadium this season.

Leicester caused arguably one of the biggest shocks in English footballing history in the previous campaign as they won the Premier League title by a stunning 10 points.

It was a sensational achievement for the Foxes and the team were indebted to the performances of N’Golo Kante, who has now joined Chelsea for over £30million, Englishman Jamie Vardy and Mahrez.

The trio were the stand-out performers for the club but, having already lost France international Kante, there are worries the Algerian star could also depart.

Former FA Cup holders Arsenal were said to be showing a huge interest in the 25-year-old and were ready to lodge an offer over £40million.

No official bid has been made by the Gunners as yet and Ranieri is hoping Mahrez, who scored 17 goals from 37 league outings last season, decides to stay.

“He improves more if he stays with us for another year, maybe next year he can think about another solution,” he told Sky Sports News HQ.

“If he goes for a lot of money, everybody will be expecting something special.

He can do something special, but with us.” The defending champions face an away trip to newly-promoted Hull City on the opening day of the Premier League season and the visitors are 2.15 favourites to clinch victory.

The hosts, who are still without a manager after the resignation of Steve Bruce, are priced at 3.40 while a draw is a 3.20 chance.

Leicester are also on the verge of completing a deal for Poland’s Bartosz Kapustka but Ranieri has refused to talk about the player until the move is finalised.